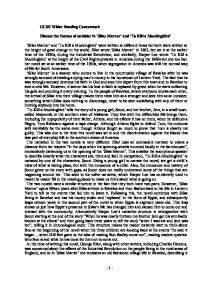 Discuss the themes of outsider in 'Silas Marner' and 'To Kill a Mockingbird'.

GCSE Wider Reading Coursework Discuss the themes of outsider in 'Silas Marner' and 'To Kill a Mockingbird' 'Silas Marner' and 'To Kill a Mockingbird' were written at different times but both were written at the height of great change in the world. Eliot wrote 'Silas Marner' in 1861, but set it at the earlier time of the 1820s, during the Industrial Revolution, and similarly, Harper Lee wrote 'To Kill a Mockingbird' at the height of the Civil Rights protests in America during the 1960s but she too had her novel set at an earlier time of the 1930s, when segregation in America was still the normal way of life for South Americans. 'Silas Marner' is a weaver who comes to live in the countryside village of Raveloe after he was wrongly accused of stealing a dying man's money in his hometown of Lantern Yard. The fact that he was wrongly accused destroys his faith in God and sees him depart from this town and to Raveloe to start a new life. However, it seems that his loss in faith is replaced by greed when he starts collecting his gold and counting it every evening. To the people of Raveloe, where everyone knows each other, the arrival of Silas into their village makes them view him as a stranger and sees him as an outsider, something which Silas does nothing to discourage, never to be seen socialising with any of them or inviting anybody into his home. 'To Kill a Mockingbird' tells the story of a young girl, Scout, and her brother, Jem, in a small town called Maycomb, in the southern state of Alabama. They live with the difficulties life brings them, including the unpopularity of their father, Atticus, and the effects it has on them, when he defends a n***o, Tom Robinson against a r**e charge. Although Atticus fights to defend Tom, the outcome will inevitably be the same even though Atticus fought so much to prove that Tom is clearly not guilty. ...read more.

is likely he would have been saving up to marry Sarah and giving some of his money to the church in Lantern Yard. So, for the first time Silas has money all for himself and hence he starts saving it and collecting it. As he does not really need a lot of money to live quite comfortably by himself, he ends up collecting a lot of it. It is ironic that Silas Marner should turn to collecting and counting his gold, as this greed would have been seen as a great sin, so as a result of his exclusion of the church in Lantern Yard, he has turned to one of the seven deadly sins of greed. In the same way, the strict religion of Mr Radley, "a foot-washing Baptist" was the origin for Arthur 'Boo' Radley's imprisonment in his own home. "Foot-washers believe that anything that's pleasure is sin", so when Arthur Radley got acquainted with the wrong sort of people and dot into a drunken joy-riding spree in his youth, his father has been punishing him for the rest of his life. The different churches in Maycomb are also used as the means for which Jem and Scout meet other n*****s except Calpurnia by going to the black church 'First Purchase'. From the time he moved to Raveloe, the villagers have considered Silas Marner as an outsider. This is primarily to do with him being new to the village, and the people of Raveloe are noted for their routine and their lack of change, so when a newcomer arrives in their home village they do not really like it. Also, the fact that he has a skill intimidates the villagers as it shows a sign of someone being more intellectual than them, and so for this reason they view him as an outsider. Marner's appearance was also a reason for him being an outsider, with the Raveloe villagers describing it as having "mysterious qualities" and "large brown protuberant eyes in Silas Marner's pale face". ...read more.

Atticus always speaks formally yet politely, whilst Bob Ewell uses, cruel unpleasant language at the trial "I seen that black n****r yonder ruttin' on my Mayella", using foul language to mirror the kind of person he is. The authors can be seen to have ulterior motives and trying to get a message across to the readers in writing these novels. In 'To Kill a Mockingbird' it is clear that Lee is writing this to coincide with the Civil Rights Movement, to show readers how prejudiced society can be. She does this effectively through the case of Tom Robinson and showing that he was clearly innocent of the crime. On the contrary, Eliot's hidden motives in 'Silas Marner' are not so obvious to the reader, firstly being her concern over the Industrial Revolution and its effects on rural communities. However, the fact that George Eliot is the pseudonym for Mary Ann Evans tells us that society at the time was quite small minded and would not have appreciated the work of a woman, thus forcing her to pretend to be a man. This tells us that she was different from other woman of her time, as determination to have her work published meant that she was willing to pretend to be a man. It is possible that the character of Silas mirrors Eliot in the way of her too being an outsider as she set up home with G.H. Lewes, whom already had an estranged wife. So, through 'Silas Marner' Eliot could be trying to say that society needs to change and except those who seem to be strange or different in some way. To conclude, I would sympathise with Boo Radley more than Silas Marner. Silas chooses to be a recluse by shutting himself off from the rest of Raveloe whilst Boo had no real choice for being shut away from the world. He was made an outsider through the actions of his strict father, who has made Boo suffer the consequences of a past mistake for most of his life. - 1 - ...read more.