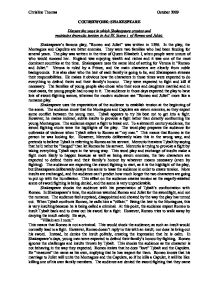 Discuss the ways in which Shakespeare creates and maintains dramatic tension in Act III, Scene i of Romeo and Juliet.

COURSEWORK: SHAKESPEARE Discuss the ways in which Shakespeare creates and maintains dramatic tension in Act III, Scene i of Romeo and Juliet. Shakespeare's famous play, "Romeo and Juliet" was written in 1596. In the play, the Montagues and Capulets are bitter enemies. They were two families who had been feuding for several years. The play was written in the time of Queen Elizabeth I, when people were unsure of who would succeed her. England was enjoying wealth and riches and it was one of the most dominant countries at the time. Shakespeare uses the same kind of setting for Verona in "Romeo and Juliet." Verona is ruled by a Prince, and the main characters are clearly from noble backgrounds. It is also clear who the heir of each family is going to be, and Shakespeare stresses their responsibilities. He makes it obvious how the characters in those times were expected to do everything to defend theirs and their family's honour. They were expected to fight and kill if necessary. The families of young people also chose who their sons and daughters married and in most cases, the young people had no say in it. ...read more.

However, Romeo doesn't reply to this with an insult; nor does he bring out his sword. Instead, he denies the insult politely, creating the impression that he is calm. In Shakespeare's days, young men were expected to defend their family's honour by fighting. Romeo ignores the challenges and insults thrown by Tybalt. This shocks the audience as the character is not behaving in the way they expected. Romeo insists that he does "love" Tybalt and the Capulets. He "treasures" the name as his own, implying that he has respect for them. Romeo knows that his marriage to Juliet will unite the Montagues and the Capulets, so if he kills a Capulet, it will be like killing one of his own family members. The audience are denied the sword fighting that they came to watch and they feel disappointed because they might think there isn't going to be a swordfight at all. However, they might expect Benvolio or Mercutio to challenge Tybalt seeing that Romeo has refused to do so. This is because they are also Montagues, and any insult directed at Romeo is also directed at them, and they don't want to defile their or their family's honour. ...read more.

The audience's expectation of the behaviour of Romeo finally comes true. By the end of the scene, Romeo kills Tybalt in the fight. The Prince decides to throw Romeo out of Verona for good. The audience are tense because they want to know what is going to happen to the relationship between Romeo and Juliet. They want to know what's going to happen if Romeo comes back for Juliet. Shakespeare creates and maintains dramatic tension all the way through Act III, Scene i. He uses the word-play of the characters so tension can be built up towards the fight. The tension is maintained as characters behave in unexpected ways. Romeo tries to walk away from the fight, which is surprising to the audience. Shakespeare delays the fight so the audience are impatient to see it. Shakespeare knows that the audience knows that young men in that time were expected to fight to defend their honour. In the play, there are several situations where the young men and their families are insulted by other young men, and the audience eagerly wait to see a fight break out. This creates tension because the audience almost know for certain that there's going to be some violence and they wait for it. ?? ?? ?? ?? Chrisline Thomas October 2009 ...read more.