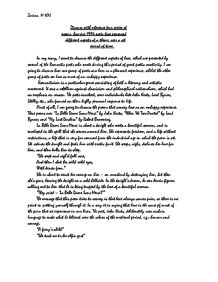 Discuss with reference to a series of poems, how pre 1914 poets have expressed different aspects of a theme, over a set period of time.

Discuss with reference to a series of poems, how pre 1914 poets have expressed different aspects of a theme, over a set period of time. In my essay, I want to discuss the different aspects of love, which are presented by several of the Romantic poets who wrote during this period of great poetic creativity. I am going to discuss how one group of poets saw love as a pleasant experience, whilst the other group of poets see love as more of an unhappy experience. Romanticism is a particular genre consisting of both a literary and artistic movement. It was a rebellion against classicism and philosophical rationalism, which had an emphasis on reason. The poets involved, were individuals like John Keats, Lord Byron, Shelley etc., who focused on their highly personal response to life. First of all, I am going to discuss the poems that convey love as an unhappy experience. These poems are: "La Belle Dame Sans Merci" by John Keats; "When We Two Parted" by Lord Byron; and "My Last Duchess" by Robert Browning. La Belle Dame Sans Merci is about a knight who meets a beautiful woman, and is enveloped in the spell that she weaves around him. She represents freedom, and a life without restrictions, a life that is very far removed from the industrial age in which the poem is set. ...read more.

Also, he uses alternate rhyme. "When we two parted In silence and tears Half broken - hearted To sever for years" The final poem that conveys love as unhappy is My Last Duchess. In this poem, the duke is talking about his late wife whilst looking at a portrait o her. We get the impression that even though he feels quite bitter towards her, he still loves her. He thinks she was flirtatious towards other men. "Too easily impressed; She liked whate'er She looked on, and her looks went everywhere." This also implies that the Duke might have been a bit jealous of the Duchess. The Duke says that she enjoyed all the luxuries that being a Duchess gave her. "The bough of cherries some officious fool Broke in the orchard for her, the white mule She rode with round the terrace - all and each Would draw from her alike the approving speech." This poem is quite mysterious and is set out in the form of a dramatic monologue. It is an ironic representation of the relationship between two people. Robert Browning has used rhyming couplets for this poem, and it is set out in short lines that help to get his point across. "That's my last Duchess painted on the wall, Looking as if she were alive, I call That piece a wonder, now; Fra Pandolf's hands Worked busily a day, and there she stands." ...read more.

This poem consists of all the different ways that a woman loves a man. In total, there are seven ways in which she expresses her love. All of these images that are expressed in this poem are examples of abstract images. That means that yo can't measure the love that she feels. E.g.: She loves him intensely- "I love thee to the depth and breadth and height My soul can reach." She loves him both artificially and naturally- "I love thee to the level of every day's Most quiet need, by sun and candlelight." She loves him in all innocence- "And with my childhood's faith" Most importantly, she loves him eternally- "I shall but love thee after death." This poem takes the form of a sonnet, with a regular rhythm, rhyme scheme and structure. Elizabeth Barrett Browning has used comparisons to try and express in words, the quality and quantity of her love. She has also expressed the strength and quality of her love, by using many slippery images. In my essay, I have discussed how pre 1914 poets have conveyed love in their poems. Some of these were happy, and some were unhappy. Most of the poems that were written during this period of time were about love. This must mean that many of the poets found it quite an important topic to write about, and it was easy for them to express, as most of them based their poems on personal experiences. Zarina. M 10U ...read more.