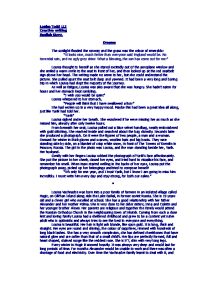 Louise Todd 11I Creative writing English Story. Dreams The sunlight flooded the runway and the grass was the colour of emeralds: "It looks nice, much Better than everyone said England would be. No torrential rain, and no ugly grey skies! What a blessing, the sun has come out for me!" Louisa thought to herself as she stared excitedly out of the aeroplane window and she smiled a warm smile to the seat in front of her, and then looked up at the red seatbelt sign above her head. The writing made no sense to her, but she could understand the picture. She pulled apart the seat belt clasp and yawned. It had been a very long and boring trip in which Louisa had slept the majority of the journey. As well as fatigue, Louisa was also aware that she was hungry. She hadn't eaten for hours and her stomach kept rumbling. "I wish you would be quiet" Louisa whispered to her stomach, "People will think that I have swallowed a lion!" She had woken up in a very happy mood. Maybe this had been a great idea all along, just like Yarik had told her. "Yarik" Louisa sighed under her breath. She wondered if he were missing her as much as she missed him, already after only twelve hours. From beneath her seat, Louisa pulled out a blue velvet handbag, neatly embroidered with gold stitching. She reached inside and searched about the bag clumsily. Seconds later she produced a photograph. On it were the figures of two people, a man and a woman. Dressed for winter in thick gloves and scarves, woollen hats and big boots. They were standing side by side, on a blanket of crisp white snow, in front of The Towers of Kremlin in Moscow, Russia. The girl in the photo was Louisa, and the man standing beside her, Yarik. ...read more.

Obediently, she did as she was told and quickly got in the car. Looking outside her window was shocking. Cars everywhere, tarmac roads, motorways, and big buildings. Houses made out of brick. Behind it all, field upon field of English countryside. Everything was different and it was all too much to take in. Within 20 minutes Louisa had began to drift off. John was babbling away on his mobile phone beside her, and all she could think of was Yarik. She finally fell asleep feeling hungry and home sick. When she woke, John was outside unloading her luggage onto the pavement. By now it was dark, very dark, and she couldn't see much of her surroundings, yet she was still aware of the comparisons between here and her beautiful country. In her part of Russia there are no street lamps, but here there were hundreds, on either side of the road, illuminating all the red brick houses. It was strange, Louisa thought. Cartoon like. She picked up her bag and stepped out of the car. The English man John greeted her: "Good sleep love? He's just inside. He can speak Russian. R.U.S.S.I.A.N. you understand? You aint going to like what he's got to say though. It's late mind. You'll probably be spared until the morning." The English man is chattering away again. All she wants to do is get inside the house and Speak with her beloved Yarik's uncle. John points Louisa in the right direction. She walked into the house, and into a warm looking dimly lit room with three or four plush chairs a television and a fireplace. In the far corner sits a stocky man who she guessed is Mr Sorokin. As soon as he saw Louisa he stood up and greeted her in fluent Russian. He kissed her cheek, offered her a seat and made her feel very welcome. He asked her if she was hungry and offered her a plate of food. ...read more.

It is hard to believe in God when I am stuck in this situation but Sean gives me hope. He can speak fluent Russian, but often encourages me to speak English. So that Yarik can be proud of me when I go home. Thank god I've got Sean behind me, I can talk to him about anything. He's the only real friend I've got. Goodbye Xx" It just so happened that Sean was an undercover policeman. He had heard news of A Russian man named Sorokin exploiting young Russian girls, and had gone under cover to expose this man. When he'd first met Sorokin, Sean had been introduced to Louisa. He liked her, and felt incredibly sorry for her. He made it his personal mission to rescue her. Sean was unable to bust Mr Sorokin straight away because he had no substantial evidence against him. Over a course of three nights, Sean secretly filmed his conversations with Louisa. In doing this, and taping Louisa's harrowing story, and heart-felt cries for help, Detective Constable Sean Williams had obtained enough evidence to raid Mr Sorokin's house. That very same night he had Mr Sorokin arrested, and his house searched. Louisa was allowed outside for the first time since she had been held prisoner. She was put in a hotel room close to Sean for a couple of nights until the police had taken a formal statement. Days later, Louisa was given back her passport, her purse and her official papers, and only now could she begin to think about going home. Louisa owed a lot to Sean. She was very lucky. He rescued her, and that is something she will never forget. At last, her horrific ordeal was over. Sean got her the money to fly home, and it was he who saw her off at the airport, and waved her goodbye as she stepped onto the aeroplane. * Louisa stared out of the cabin window, The sunlight flooded the runway and the grass was the colour of emeralds. It felt good to be going home. ...read more.