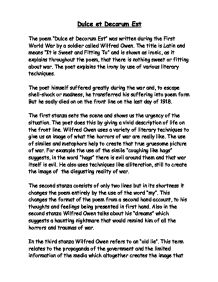 Dulce et Decorum Est The poem "Dulce et Decorum Est" was written during the First World War by a soldier called Wilfred Owen. The title is Latin and means "It is Sweet and Fitting To" and is shown as ironic, as it explains throughout the poem, that there is nothing sweet or fitting about war. The poet explains the irony by use of various literary techniques. The poet himself suffered greatly during the war and, to escape shell-shock or madness, he transferred his suffering into poem form But he sadly died on on the front line on the last day of 1918. ...read more.

This changes the format of the poem from a second hand account, to his thoughts and feelings being presented in first hand. Also in the second stanza Wilfred Owen talks about his "dreams" which suggests a haunting nightmare that would remind him of all the horrors and traumas of war. In the third stanza Wilfred Owen refers to an "old lie". This term relates to the propaganda of the government and the limited information of the media which altogether creates the image that war is the right thing and that all young men should want to join the war and go to fight. ...read more.

This poem is also relevant in today's world and the war in Iraq because of propaganda in the media. Every day there is some form of advertising for the army and there is still not enough information about the war so Wilfred Owen's poem is still correct today in that the messages given out about war are still a "lie". The poem reveals to us the truths and the realities of war by creating an image of the horrors. The poet does this by using literary techniques like telling us the traumas of war first hand. He shows us that "Dulce et decorum est pro patria mori", It is sweet and fitting to die for one's country, is definitely an "Old Lie". ...read more.

This is a response to a question asking about the relevance and effect of 'Dulce et Decorum est' by Wilfred Owen. Unusually, there is no comparative poem but nonetheless, the candidate responses well to the task and draws on a ...

This is a response to a question asking about the relevance and effect of 'Dulce et Decorum est' by Wilfred Owen. Unusually, there is no comparative poem but nonetheless, the candidate responses well to the task and draws on a number of poetic devices from the poem to analyse. Some sections are more effective than others but this candidate can be proud of their ability to update the themes of "the old Lie" to modern day wars such as the War on Terror. The structure of the essay is fine, considering there is no comparative poem but were there one, the structure of commenting stanza-by-stanza may not be advisable. This structure however is nicely suited as we see the candidate work their way through each of the three stanzas.

The Level of Analysis is fair. Parts of the analysis are more convincing than others, and some parts don't qualify even as feature-spotting because the candidate does not always provide a quote - "He also uses techniques like alliteration, still to create the image of the disgusting reality of war. (sic)" Quotes are an important part of the analysis - imagine you are writing for someone who does not know the poem. You need to pick the most important, most powerful quote that represents your points e.g. for the above example, the candidate would chose "Knock-kneed" or "Men marched asleep".
The candidate, to improve would look to consider not just the irony of the poem, but also the connotative messages the language carries. "Coughing like hags" and "like a devil's sick of sin" do a lot more than simple connect with the reader on an emotional level. They carry connotations of preternatural occurrences - a hellish description - he is likening the front-line to being trapped in Hell. Analysing the obvious will only get you so many marks, but to get higher grades and to push your essay just a little bit further out there so that the examiner reads it and becomes really impressed with how you interpret to poem is what will get you the A/A* grades.

The Quality of Written Communication here is fine. Though only very few marks comparatively are available in this part, it is still of high importance to ensure the clarity of your written expression because the amount of marks available can be a large as the difference between a grade boundary sometimes. This candidate's clarity is very good and, even though they stick to short, simple sentences they use appropriate terminology where it's needed (except for mistaking "poetic techniques" for "literary techniques").