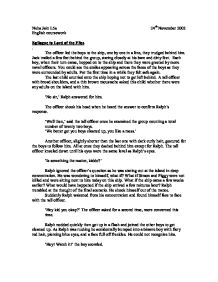 Epilogue to Lord of the Flies

Neha Jain L5a 24th November 2003 English coursework Epilogue to Lord of the Flies . The officer led the boys to the ship, one by one in a line, they trudged behind him. Jack trailed a few feet behind the group, staring closely at his bare and dirty feet. Each boy, when their turn came, hopped on to the ship and there they were greeted by more navel officers. You could see the smiles appearing across the faces of the boys as they were surrounded by adults. For the first time in a while they felt safe again. The last child scurried onto the ship hoping not to get left behind. A tall officer with broad shoulders, and a thin brown moustache asked this child whether there were any adults on the island with him. 'No sir,' Ralph answered for him. The officer shook his head when he heard the answer to confirm Ralph's response. 'Well then,' said the tall officer once he examined the group counting a total number of twenty two boys. 'We better get you boys cleaned up, you like a mess.' Another officer, slightly shorter than the last one with dark curly hair, gestured for the boys to follow him. All at once they dashed behind him except for Ralph. The tall officer kneeled down until his eyes were the same level as Ralph's eyes. ...read more.

The curly haired officer had just returned after showing the littluns to the sleeping quarters. 'You look like you have had a good dinner. Well, have you?' The officer asked Ralph. Ralph nodded and smiled at the officer. 'How long more is the journey going to take?' Ralph asked the officer. 'We just started little man, probably a few weeks if we are lucky. Don't worry we will reach safe and sound. 'The officer replied. Again Ralph nodded. The officer chuckled, 'You look tired. How about I show you where the cabins are. Follow me.' Ralph dragged his feet behind the officer for what seemed like hours. At last the officer halted in front of a large door. He opened it and the room was packed full of mainly sleeping littluns. Ralph tip toed in searching for an empty bed. He curled up under the warm sheets and rested his head against the fluffy pillow. Ralph closed his eyes for just a second and instantly he was in a deep slumber. A soft sound woke Ralph up. It was coming from his stomach. He sat up in bed and realized he was hungry again, even after devouring himself in the huge dinner he had the night before. He creped out of bed and strolled down the hallways of the ship. The sky was gloomy. He followed the smell of the food with his nose and reached the dining room. ...read more.

Jack pushed Ralph towards the edge of the ship but Ralph turned driving Jack over the railing so that he was dangling over the edge. Ralph felt more relaxed as his life was less at risk. However he still had one hand held on to Jack's one hand. But Ralph knew Jack was still strong-minded to kill him. With an infuriated look in his eyes, Jack raised his knife with his free hand and with all his strength stabbed it into Ralph's hand. Ralph howled bringing his wounded hand close to his body. This forcefully caused Ralph to let go of Jack's hand, Ralph watched Jack tumble down into the rough, blue waves. Ralph's heart was pounding, he sprinted over to the other side of the ship. There he saw a large group of boys in a circle surrounding Roger who was faking an injury by clutching to his leg and crying. Ralph barged through. Two officers were trying to calm him down. When Roger saw Ralph live and well his crying came to an end. Everyone turned their heads and began to wonder why Ralph was in such a hurry as he barged through. 'Jack...overboard! I.... tried.... to... save him! But! Help! This way! Follow... me!' Ralph said gasping for breath. Ralph with all his energy dashed back to where he came from. The officers followed behind and some boys curious to know also trailed behind. Ralph reached the spot where Jack had fallen but, to his disappointment he was nowhere to be seen. Jack had drowned by the waves. ...read more.