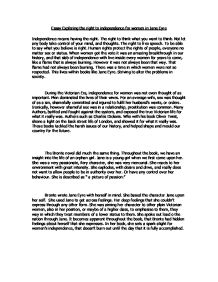 Essay Exploring the right to independence for women in Jane Eyre.

Essay Exploring the right to independence for women in Jane Eyre Independence means having the right. The right to think what you want to think. Not let any body take control of your mind, and thoughts. The right to free speech. To be able to say what you believe is right. Human rights protect the rights of people, everyone no matter sex or status. When women got the vote it was an amazing breakthrough in our history, and that slab of independence with live inside every women for years to come, like a flame that is always burning. However it was not always been that way. That flame had not always been burning. There was a time in which women were not so respected. This lives within books like Jane Eyre. Striving to alter the problems in society. During the Victorian Era, independence for women was not even thought of as important. Men dominated the lives of their wives. For an average wife, sex was thought of as a sin, shamefully committed and injured to fulfil her husband's wants, or orders. Ironically, however shameful sex was in a relationship, prostitution was common. Many Authors, battled and fought against the system, and exposed the true Victorian life for what it really was. Authors such as Charles Dickens. Who with his book Oliver Twist, shone a light on the back street life of London, and showed it for what it really was. These books tackled the harsh issues of our history, and helped shape and mould our country for the future. ...read more.

Jane was hallucinating, she was completely terror struck. 2All looked colder and darker in that visionary hollow than in reality: and the strange little figure there gazing at me, with a white face, and arms specking the gloom and glittering eyes of fear moving where all else was still, had the effect of a real spirit." She looked in the mirror. It shows her the duality of her character, her passionate, and her weak, with "glittering eyes of fear." She fainted from sheer horror of her experience. After being expelled from the festivities of Christmas cheer, "from every enjoyment I was of course, excluded." She was sent before Mr Brocklehurst, who interrogated her, about possible entry to Lowood School. "Do you say your prayers every morning?" He proved to be a vicious and un-caring man. Who on face value seemed to be a church-going, upstanding member of the society, but he was a terribly harsh, mean man. Jane rebelled against some of his questions. She refused to listen to some of his statements. She is no learning to assert herself, she is gaining more independence. However what is her strength was also her biggest weakness. Mr Brocklehusrt did not like her behaviour. Her remarks were not welcomed by him. "Psalms are not interesting" Jane said. He is a hot-tempered man, and doesn't take kindly to Jane's comments. "That proves you have a wicked heart, and you must prey to god to change it... and give you a heart of flesh." ...read more.

Jane had grown up a lot at Lowood School. It had built her character. Mr Rochester surprises Jane in the way that he treats her. Jane is reminded of her depression about herself when a party is held at Thornfiled. Among the guests was Blanche Ingam. A beautiful and young lady. "This beautiful an accomplished lady...as brilliant as her jewels." She was considered "the belle of the evening." Jane was rather envious of Blanche. She compared herself to her. This shows the duality of society. Jane is plain, and works hard for what she earns. Whereas Blanche is Beautiful, but has a heart "on which nothing bloomed spontaneously." She feels as though she doesn't belong, even though Mr Rochester had insisted that she and Adele were involved in the festivities. Jane became upset when the ladies started discussing the "in competency" of governesses. Blanche said "My dearest, don't mention governesses, the word makes me nervous." This shows how the higher classes view that of the lower classes. However Mr Rochester believes in treating Jane like an equal. "I don't wish to treat you like an inferior." He also says " My equal is here." Mr Rochester is symbolic of the start of independence for women. He neglects social structure, and loves on impulse. He seems not to care about material gain, and believes that marriage is not for business or family gain, but purely for love. This is Bronte's way of showing the Victorian society the love is more important, and that poverty is nothing to be afraid of. After all that Jane has been through, she does indeed fall in love with Mr Rochester. This truly does show that love conquers all. ...read more.