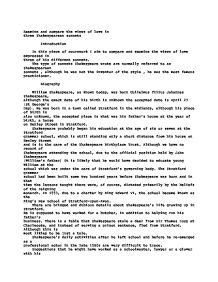 Examine and compare the views of love in three Shakespearean sonnets

Examine and compare the views of love in three Shakespearean sonnets Introduction In this piece of courswork I aim to compare and examine the views of love expressed in three of his different sonnets. The type of sonnets Shakespeare wrote are normally referred to as Shakespearean sonnets , although he was not the inventor of the style , he was the most famous practicioner. Biography William Shakespeare, as known today, was born Gulielmus filius Johannes Shakespeare, although the exact date of his birth is unknown the accepted date is April 23 (St George's Day). He was born in a town called Stratford in the midlands, although his place of birth is also unknown, the accepted place is what was his father's house at the year of birth, a house on Henley Street in Stratford. Shakespeare probably began his education at the age of six or seven at the Stratford grammar school, which is still standing only a short distance from his house on Henley Street and is in the care of the Shakespeare Birthplace Trust. Although we have no record of Shakespeare attending the school, due to the official position held by John Shakespeare (William's father) it is likely that he would have decided to educate young William at the school which was under the care of Stratford's governing body. The Stratford grammar school had been built some two hundred years before Shakespeare was born and in that time the lessons taught there were, of course, dictated primarily by the beliefs of the reigning monarch. ...read more.

Shakespeare's love towards this 'dark lady' is present , it isn't quite a view of unconditional love portrayed , as I don't think he means to portray this lady as a beast , he just tries to portray a real woman , instead of a fake 'poetic' woman. Let me not to the marriage of true minds Let me not to the marriage of true minds Admit impediments. Love is not love Which alters when it alteration finds, Or bends with the remover to remove: no! it is an ever-fixed mark That looks on tempests and is never shaken; It is the star to every wandering bark, Whose worth's unknown, although his height be taken. Love's not Time's fool, though rosy lips and cheeks Within his bending sickle's compass come: Love alters not with his brief hours and weeks, But bears it out even to the edge of doom. If this be error and upon me proved, I never writ, nor no man ever loved. Paraphrase Let me not declare any reasons why two True-minded people should be married. Love is not love Which chages when it finds an reason for it to change , Or bends from its firm stand even when the lovers are unfaithful: Oh no! it is a fixed mark That sees storms but it never shaken; It is the guiding star to every lost ship, Whose value cannot be calculated, although its height can be measured. ...read more.

I believe Shakespeare was paid a favour of some sort by this mysterious friend , and is showing his grtitude in this sonnet , as it seems that way from the writing style . This sonnet reads faster than the others , it is more light hearted I feel and more exciting , I do not know completely why the word exciting springs to mind , but it seems fitting . This sonnet reminds me of a thank you that you gave out when you received a present at Christmas, when you were young , one that you had been longing for since a few months before and did'nt think you were going to get , the keen hurried frenzy of thank you's and brighter eyes that accompanied the excitement of having that present . Sonnet 18 seems to have that kind of quality to it . In sonnet 116 (Let me not to the marriage of true minds) , Shakespeare is describing an Idealistic type of love, or 'true' love. This is the only one of the sonnets I've been looking at that does'nt have any 'subjects' or people mentioned in the sonnet . In the other sonnets Shakespeare talks about his love for another person , how he feels about this person , whereas in sonnet 116 he talks about love , and how he thinks it should be . Shakespeare is possibly talking about a love he has never had , because in his eyes this is perfection , which is always hard to attain , whatever your view of it is . ...read more.