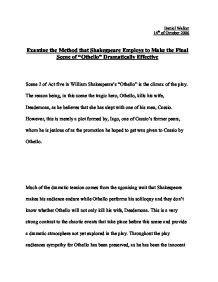 Examine the Method that Shakespeare Employs to Make the Final Scene of &quot;Othello&quot; Dramatically Effective

Daniel Walker 14th of October 2006 Examine the Method that Shakespeare Employs to Make the Final Scene of "Othello" Dramatically Effective Scene 2 of Act five in William Shakespeare's "Othello" is the climax of the play. The reason being, in this scene the tragic hero, Othello, kills his wife, Desdemona, as he believes that she has slept with one of his men, Cassio. However, this is merely a plot formed by, Iago, one of Cassio's former peers, whom he is jealous of as the promotion he hoped to get was given to Cassio by Othello. Much of the dramatic tension comes from the agonising wait that Shakespeare makes his audience endure while Othello performs his soliloquy and they don't know whether Othello will not only kill his wife, Desdemona. This is a very strong contrast to the chaotic events that take place before this scene and provide a dramatic atmosphere not yet explored in the play. ...read more.

He proceeds to speak of Desdemona's white skin and how it is as "smooth, monumental as alabaster". This could be interpreted in many ways; He could be saying that he does not want to kill her, or that he wants to preserve someone of such beauty in a life like state (i.e. he wants to kill her in a way that does not deface her body) but it could also be construed as a reference to a tomb, meaning that Desdemona is dead to Othello already. The tension really starts to build as Desdemona wakes up and Othello slowly reveals his intentions and the audience's hope of her survival slowly diminishes. Finally when Othello suffocates his wife, he seems to revert back to mercy and mistakes Emilia's calls for the dying cries of Desdemona "What noise is this? Not dead? Not yet quite dead? I that am cruel am yet merciful; I would not have thee linger in thy pain: So, so." ...read more.

Now although there is nothing saying that Othello regretted or felt remorse for killing his wife, it is very clear that he understands what he has lost. He goes on to link Desdemona's demise to the most significant of natural events " Methinks it should now be a huge eclipse, Of sun and moon, and th'affrighted globe, should yawn at alteration'" As Emilia walks in the room it seems as if she has become the voice that expresses the audience's feelings of outrage "O, the more angel she, And you the blacker devil!" It seems that Emilia's duty in this scene is to defend Desdemona's honour "Thou art rash as fire, to say, That she was false: O, she was heavenly true!" and it seems that she sees the stories of Dedemona and Cassio's relations for the lies they truly are (something the audience obviously hoped Othello would do) "If he say so, may his pernicious soul Rot half a grain a day! he lies to the heart". ...read more.

This essay engages with the task set well, but there are plenty of parts which could be improved. I would've liked to have seen the introduction expand on the connotations of a tragedy's climax, as this would've led to a ...

This essay engages with the task set well, but there are plenty of parts which could be improved. I would've liked to have seen the introduction expand on the connotations of a tragedy's climax, as this would've led to a focus throughout the essay on catharsis and other tragic techniques. There are times when the audience response is explored, however this is not enough! I like how the second paragraph begins by showing awareness of Shakespeare's construct, yet this is the only occurrence.

The analysis in this essay is sound, exploring language and imagery techniques used by Shakespeare. I liked how quotes were well embedded as this ensured the analysis flowed nicely, also allowing a close focus on the techniques and the dramatic effect. Technical terms are used well, such as tension and the focus on Othello's soliloquy. I would've liked to seen some recognition that this is, in fact, Othello's first soliloquy of the play, showing Iago's influence over him. There is no discussion of the hatred for Iago throughout, which is a key part of the dramatic ending, where he says nothing after Othello has killed himself. It would have been stronger if the essay had explored the bloodiness of the final scene, as this would've been a potent image on stage.

The essay has a clear introduction, but lacks a conclusion which is a shame. A weaker point of this essay are the signposts for each paragraph - they tend to be lengthy and so lose focus slightly. Having concise and clear starting sentences allows the point to relate directly back to the question. The language used in this essay is sometimes colloquial such as "the tension really starts to build up" - making it more sophisticated would be wise. Otherwise, spelling, punctuation and grammar are strong.