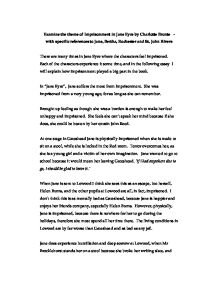 Examine the theme of Imprisonment in Jane Eyre by Charlotte Bronte - with specific references to Jane, Bertha, Rochester and St. John Rivers

Examine the theme of Imprisonment in Jane Eyre by Charlotte Bronte - with specific references to Jane, Bertha, Rochester and St. John Rivers There are many times in Jane Eyre where the characters feel imprisoned. Each of the characters experience it some time, and in the following essay I will explain how imprisonment played a big part in the book. In "Jane Eyre", Jane suffers the most from Imprisonment. She was imprisoned from a very young age; for as long as she can remember. Brought up feeling as though she was a burden is enough to make her feel unhappy and imprisoned. She feels she can't speak her mind because if she does, she could be beaten by her cousin John Reed. At one stage in Gateshead Jane is physically imprisoned when she is made to sit on a stool, while she is locked in the Red room. Terror overcomes her, as she is a young girl and a victim of her own imagination. ...read more.

Adele is Mr Rochester's ward, and she doesn't have the choice to come and go as she pleases either. She has been in Thornfield for as long as she can remember, similar to Jane, only Adele is treated much better. Grace Poole looks after Bertha Mason, and must keep her under a watchful eye at all times. If she takes a break the consequence is an escaped and dangerous lunatic. It is hard on her to constantly keep and eye on Bertha; she isn't much company and can be quite aggressive. Grace Poole is a prisoner from the outside, normal world, and must be locked in an attic, although it is her own will. Jane is not only imprisoned in the places she stays in, but in the era of time in which she lives. The fact that she is a woman imprisons her. "Women are supposed to be very calm generally: but women feel just as men feel; they need exercise for their faculties, and a field for their efforts ...read more.

His sisters are his only close company which can also make him feel imprisoned. Jane experiences imprisonment while staying with St. John. She is unhappy and has a longing for Mr Rochester, although, she can leave St. John Rivers if she pleases. She conceals her unhappiness from him, which could make her feel even more imprisoned. Meanwhile, Mr. Rochester has tragically turned blind. He is now a prisoner in his own state of appearance, which holds him back from doing lots of things, e.g. seeing the world as he'd planned, or seeing, at all. This imprisons him in the house, and he can't move very far without assistance. He is also deeply saddened on the inside, and without Jane, he feels trapped. Also, Adele had been sent to a boarding school and was feeling unhappy and trapped, as these weren't her surroundings. She might feel imprisoned as Jane did in Lowood. All in all, Imprisonment plays a very frequent role in the book. Almost every main character experiences it, but none as much as Jane Eyre herself. ?? ?? ?? ?? ...read more.