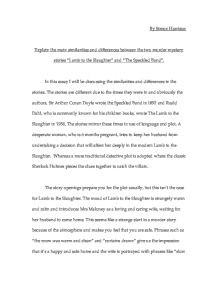 Explain the main similarities and differences between the two murder mystery stories &quot;Lamb to the Slaughter&quot; and &quot;The Speckled Band&quot;.

By Simon Harrison Explain the main similarities and differences between the two murder mystery stories "Lamb to the Slaughter" and "The Speckled Band". In this essay I will be discussing the similarities and differences in the stories. The stories are different due to the times they were in and obviously the authors. Sir Arthur Conan Doyle wrote the Speckled Band in 1892 and Roald Dahl, who is commonly known for his children books, wrote The Lamb to the Slaughter in 1954. The stories mirror these times in use of language and plot. A desperate woman, who is 6 months pregnant, tries to keep her husband from undertaking a decision that will affect her deeply in the modern Lamb to the Slaughter. Whereas a more traditional detective plot is adopted where the classic Sherlock Holmes pieces the clues together to catch the villain. The story openings prepare you for the plot usually, but this isn't the case for Lamb to the Slaughter. The mood of Lamb to the Slaughter is strangely warm and calm and introduces Mrs Maloney as a loving and caring wife, waiting for her husband to come home. This seems like a strange start to a murder story because of the atmosphere and makes you feel that you are safe. Phrases such as "the room was warm and clean" and "curtains drawn" give us the impression that it's a happy and safe home and the wife is portrayed with phrases like "slow smiling air about her". ...read more.

If so, he takes on a more aggressive approach to them and seems to have little time or want to talk to them. Due to Sherlock being so polite he usually gets answers from the people he talks to, unless he is accusing the person. If however, he doesn't get verbal evidence, he will have found some physical evidence that will back up his theory. This is due to his hawk like ability to spot every little detail and digest it to make sense of the situation. All of these "super" abilities make Sherlock the perfect detective in everyway, but he doesn't solve any cases. Sherlock only solves the cases that he thinks will either challenge him or be of great help to someone in need. Like in the big contrast between the villains, there is also a big contrast between the detectives. The detective in Lamb to the Slaughter is Jack Noonan. Jack isn't as quick as Sherlock Holmes and seems quite ignorant to detail. He comes into Mary's house after the murder and consoles her. This shows that he isn't perhaps as thorough in his work as Sherlock. Jack is caring and polite but this makes him gullible and easy for Mary to manipulate. He seems more interested in Mary than the murder scene and talks to her for most of the investigation. He seems quite careless of the fact there is evidence in the room and adds to this by eating the same leg of lamb that Mary hit Patrick with. ...read more.