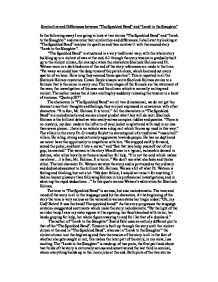 Similarities and Differences between "The Speckled Band" and "Lamb to the Slaughter" In the following essay I am going to look at two stories "The Speckled Band" and "Lamb to the Slaughter" and examine their similarities and differences. I shall start by looking at "The Speckled Band" analyze its qualities and then contrast it with the second story "Lamb to the Slaughter". "The Speckled Band" is structured in a very traditional way, with the whole story building up to a violent climax at the end. All through the story tension is gradually built up to the violent climax, for example when the characters Sherlock Holmes and Dr. Watson were in a dark bedroom at the end of the story references are made to the time. "Far away we could hear the deep tones of the parish clock, which boomed out every quarter of an hour. How long they seemed those quarters". This is repeated in all the Sherlock Holmes mysteries. Conan Doyle always wrote Sherlock Holmes stories to a formula that is the same in every one. The three stages of the formula are the statement of the case, the investigation of the case and the climax which is normally exiting and violent. The author makes the climax exciting by suddenly releasing the tension in a burst of violence. "Quote p187". The characters in "The Speckled Band" are all two dimensional, we do not get the chance to see their thoughts and feelings, they are just expressed in conversion with other characters. ...read more.

The author of "Lamb to the Slaughter" Roald Dahl uses an entirely different plot to that of the "The Speckled Band". Tension is built up through the story until the violent climax at the end in "The Speckled Band", whereas in "Lamb to the Slaughter" the violent climax is at the beginning and then the tension of the story is all in the fact of whether she gets caught or not, this makes the later part of the story, in my view, less exciting. The "Lamb to the Slaughter" is made up of two parts, the first part lasts about two thirds of the story is extremely serious and sensitive and the last third is comical, where everything builds up to the ironic joke at the end. Both plots of the two stories work well for that story, but I feel that "Lamb to the Slaughter" has a better plot and structure except in the last third, because I feel that everything shouldn't head towards the joke at the end. The characters in "Lamb to the Slaughter" are much better than those in "The Speckled Band" because in Mary Maloney's case we empathize with her fully, which makes her a three dimensional character. Mary Maloney at the beginning of the story is a devoted wife, who is loving and caring for her husband and has an ordinary set routine. "Mary Maloney was waiting for her husband to come home from work...when the clock said ten minutes to five, she began to listen, and a few minutes later, punctually as always, she heard tyres on the gravel outside." ...read more.

The story starts to become more unrealistic as it becomes more comical. Everything starts to build around the joke at the end, and because of this Mary Maloney becomes a two dimensional character like those in "The Speckled Band". After Mary Maloney has committed the murder she returns to relying on routine to clear herself. This part of the story is clever, but unlike the character of Mary Maloney we know so far. The other characters in "The Lamb to the Slaughter" are two dimensional, we don't get to empathise with the husband and Roald Dahl doesn't have time to build the policemen into proper characters. The tone of the story is serious like that of "The Speckled Band" but unlike "The Speckled Band" the tone changes part way through to a comedy. Roald Dahl builds up tension by having Mary Maloney express her intimacy with her husband and then gradually giving us hints that things are not what they seem in their relationship. "Yes, he said. I'm tired. And as he spoke he did an unusual thing..." Roald Dahl releases the tension built up in the first part of the story in the violent climax, but he doesn't release it all so we keep reading. I prefer "The Lamb to the Slaughter" because I find that a story where you get to empathise with characters makes the story a more interesting and believable to read. Both stories have their own qualities and differences better and worse than each other in different aspects. ...read more.