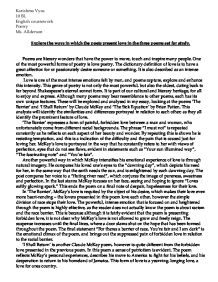 Explore the ways in which the poets present love in the three poems set for study.

Explore the ways in which the poets present love in the three poems set for study. Poems are literary wonders that have the power to move, touch and inspire many people. One of the most powerful forms of poetry is love poetry. The dictionary definition of love is to have a great affection for or passionately desire someone or something. It is also described as an intense emotion. Love is one of the most intense emotions felt by man, and poems capture, explore and enhance this intensity. This genre of poetry is not only the most powerful, but also the oldest, dating back to far beyond Shakespeare's eternal sonnet form. It is part of our cultural and literary heritage, for all to enjoy and express. Although many poems may bear resemblance to other poems, each has its own unique features. These will be explored and analysed in my essay, looking at the poems 'The Barrier' and 'I Shall Return' by Claude McKay and 'The Sick Equation' by Brian Patten. This analysis will identify the similarities and differences portrayed in relation to each other; as they all identify the prominent feature of love. 'The Barrier' expresses a form of painful, forbidden love between a man and woman, who unfortunately come from different racial backgrounds. The phrase "I must not" is repeated constantly as he reflects on each aspect of her beauty and wonder. By repeating this is shows he is resisting temptation, and this is a indication of the difficulty and the pain that is caused just for loving her. ...read more.

His culture and background are focused upon in the last stanza. McKay, talks of native dances and tribal tunes are depicted as "delicious tunes". The intense, vivid imagery aids the reader to understand McKay's love of Jamaica and his desperation to return. As with 'The Barrier', 'I Shall Return' presents a painful and heartbreaking form of love as a prominent feature. This is evident in the way McKay describes his return to Jamaica as a way to "ease his long, long years of pain" as with 'The Barrier', this final statement is an emotional climax to the poem, and enhances the suppressed pain of being torn from ones home. 'The Sick Equation' by Brian Patten is quite different from the McKay poems. Where both McKay poems depict a form of love, 'The Sick Equation' portrays a fear of love, a life without love and a lack of love. The poem is written in first person, like the McKay poems, and describes Patten as a young boy being forced to experience his parents' world of hate, and believing that no marriage could be happy. The pain of his upbringing is palpable, in statements such as "all that household's anger and its pain stung more than any teachers cane". It is obvious that this belief was instigated from a young age, as Patten compares his parents' lesson to a child's equation, that one would learn at school. This equation states that where in school 1 + 1 = 2. ...read more.

experience, that love can make one forget, or at lease ignore the pain that their parents caused and felt from their broken marriage. He realizes that not all marriages end badly, not "all others are as damaged as ourselves". This lesson ends the poem on a positive note, different from the distress displayed in the last lines of the McKay poems. It restores faith in love. The three poems analysed above present love in several different ways, from the temptation, risk and pain displayed in 'The Barrier'; the patriotic yearning portrayed in 'I Shall Return'; to the pain and distrust depicted in 'The Sick Equation'. The natural imagery used in all three poems is evidently a highly effective way of intensifying the emotion. This stirs the reader's sentiments, and instigates empathy and fascination. 'The Barrier' instigates frustration at the injustice of society and their prejudgements, at the realization of the power it has to hurt. 'I Shall return' brings out temptation; one truly wishes to see the wonders of Jamaica, expressed by the poet's love for the country. 'The Sick Equation' activates sympathetic emotions, as most would believe that a life without love is a terrible thing - this is exactly what Brian Patten experienced due to his parents' negligence. It also instigates a sense of happiness at the happy ending - Patten found love and realized he could not blame marriage for his and his parents' misery. It is true that poems have the power to move, touch and inspire, and where all three poems had similar features, each was truly unique. ...read more.