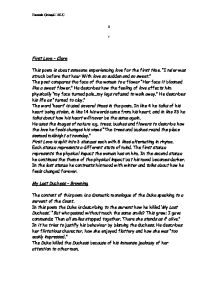 Pre-twentieth century Love poetry First Love - Clare This poem is about someone experiencing love for the first time. "I ne'er was struck before that hour With love so sudden and so sweet." The poet compares the face of the woman to a flower "Her face it bloomed like a sweet flower." He describes how the feeling of love affects him physically "my face turned pale...my legs refused to walk away." He describes his life as "turned to clay." The word 'heart' is used several times in the poem. In line 4 he talks of his heart being stolen, in line 14 his words came from his heart, and in line 23 he talks about how his heart will never be the same again. He uses the images of nature e.g. trees, bushes and flowers to describe how the love he feels changes his views "The trees and bushes round the place seemed midnight at noonday." First Love is split into 3 stanzas each with 8 lines alternating in rhyme. Each stanza represents a different state of mind. The first stanza represents the physical impact the woman has on him. In the second stanza he continues the theme of the physical impact but his mood becomes darker. In the last stanza he contrasts his mood with winter and talks about how he feels changed forever. ...read more.

In this poem he hopes that he will win his lady by his witty argument. The final couplet in each stanza declares his love in a powerful way and reassures his lady that she deserves the best. Shall I compare thee? - Shakespeare In the sonnet, Shakespeare is declaring his love and comparing it to an image more lovely than a summer's day. He wants his love to be thought of as immortal and he believes that the words he uses to describe the love he feels will last forever. 'Shall I Compare thee?' has a similar theme to many of Shakespeare's sonnets. He thinks of time as cruel and that by recording his love in a poem, they will last forever even if the love he feels dies "but thy eternal Summer shall not fade, nor loose possession of that faire thou ow'st." Throughout this sonnet he uses the image of the seasons and weather to compare with his feelings. "Summer", "Temperate", "rough windes", "Maie" and "Natures changing course" are all words used to describe his state of mind. Although Shakespeare was writing in the 16th century, his thoughts are similar to ours in this century. The language Shakespeare uses convinces you to agree with him. It is very persuasive. The style of the sonnet is put together in quatrains, which are blocks of four lines. ...read more.

He uses a beautiful image of a flower holding a bee to describe the terrible moment when he opens his dead love's eyes. "As a shut bud that holds a bee, I warily oped her lids..." When he sees her blue eyes still smiling he believed she died happy. Browning believes that Porphyria never wanted to leave him and he wants to make sure that this never happens. Death will make sure this happens. The state of his mind is very disturbed as all night long he sits holding his dead lover. The style of this monologue is very dramatic and succeeds in setting the scene very well. I found Porphyria's lover the most effective and memorable poem because I thought the dramatic monologue helped a lot to set the scene. I think this poem is particularly strong as a love poem as it describes how intense the author's love is for his lover. It is very dramatic that to preserve their love he is willing to kill her. I think the language used is fairly simple but effective compared to the other poems. It makes me think what a strange kind of love these two people shared. In his life, browning had a true romance with his wife Elizabeth who he saved from her tyrannical father. They ran away and married and had a passionate love until her death. Elizabeth Barrett was also a great love poet and I think this poem shows a great understanding of a passionate, obsessive love. Hannah Grinsell 10LC ...read more.