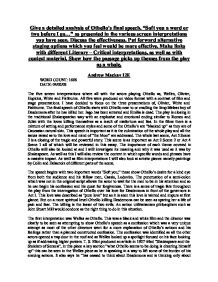 Give a detailed analysis of Othello's final speech,

Give a detailed analysis of Othello's final speech, "Soft you a word or two before I go..." as presented in the various screen interpretations you have seen. Discuss the effectiveness. Put forward alternative staging options which you feel would be more effective. Make links with different Literary - Critical interpretations, as well as with context material. Show how the passage picks up themes from the play as a whole. Andrew Mackay 12E WORD COUNT: 1606 DATE: 04/02/03 The five screen interpretations where all with the actors playing Othello as, Welles, Olivier, Hopkins, White and Fishburne. All five were produced on video format with a contrast of film and stage presentations. I have decided to focus on the three presentations of, Olivier, White and Fishburne. The final speech of Othello starts with Othello near to or cradling the limp lifeless boy of Desdemona after he has killed her. Iago has been arrested and Emilia is dead. The play is closing in the traditional Shakespearian way with an explosive and emotional ending similar to Romeo and Juliet with the loves killing themselves as a result of misfortune and lies. In the films there is a mixture of setting and performance styles and some of the Othello's are "blacked up" as they are of Caucasian natural skin. ...read more.

When he is sentenced he launches into his speech the men sent to arrest him stop and listen a response not typical of soldiers in that era who were trained to listen to commanding officers and no-one else. Olivier also wears a white smock which is very different to his previous clothes which were very ceremonial and black. This film is a recording of a stage play and this is the same format of Fishburne. Fishburne is wearing a black smock whereas the majority of other actors are wearing white and this symbolises the racism within the play as black is a tool of evil and white is worn by "heavenly bodies" as John Donne writes in Elegy 19, "On his mistress going to bed". In the Olivier and Branagh films the bed is very important. The bed has previously been an area of love and confirmation, now it is the area of death and pain. In Olivier's performance he is kneeling on the bed cradling Desdemona against his skin and embracing her intimately. The Fishburne performance has the bed behind Othello as he gives his speech and after he stabs himself he crawls up the bed to his love and Emilia who lie there lifeless. ...read more.

All the actors would be stationary and emotionless in the Othello speech and all have double sided clothes, white on one side, black on another. When Othello is talking they all show the white side and when he raises the blade they all turn to show their black side to symbolise the rejection of Othello. When Othello plunges the knife down there will be a blackout then it will raise with Othello lying over Desdemona and have Lodovico, Gratiano, Cassio and Iago stage front and when Lodovico draws the curtains the lights will fall and the last three lines will be delivered in darkness. My Othello would be one which the critic A.C.Bradley wrote about when he described Othello in 1904, "From some wonderland", "his own nature is romantic". This character would play the final speech with much compassion and with a wistful tone of voice. Overall I feel the Branagh piece is the most effective as it addresses more of the themes running through the play and the final movement of Iago is highly symbolic, resting at the feet of his dead master and his wife, like the "Spartan Dog" he is described as by Lodovico. The techniques used were excellently portrayed and executed by the talented Fishburne. ...read more.

This essay tries to do too much and therefore the response is not fully developed in any area. Whether considering productions or text analysis of language, structure and form are key and not enough discussion of this is present in this essay.