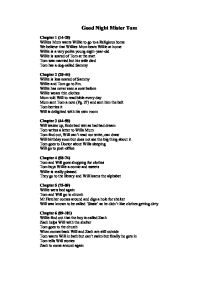 Good Night Mister Tom Chapter 1 (14-28) Willies Mum wants Willie to go to a Religious home We believe that Willies Mum beats Willie at home Willie is a very polite young eight-year-old Willie is scared of Tom at the start Tom was married but his wife died Tom has a dog-called Sammy Chapter 2 (28-44) Willie is less scared of Sammy Willie and Tom go to Fm. Willie has never seen a cow before Willie wears thin clothes Mum told Will to read bible every day Mum sent Tom a note (Pg. 37) and sent him the belt Tom berries it Will is delighted with his own room Chapter 3 (44-58) Will wakes up, finds bed wet as had bad dream Tom writes a letter to Wills Mum Tom find out, Will can't read nor write, can draw Will birthday soon but does not see the big thing about it Tom goes to Doctor about Wills sleeping Will go to post-office Chapter 4 (58-74) Tom and Will goes shopping for clothes Tom buys Willie a comic and sweets Willie is really pleased They go to the library and Will learns the alphabet Chapter 5 (75-89) Willie wets bed again Tom and Will go to church Mr Fletcher comes around and digs a hole for shelter Will was known to be called 'Sissie' as he didn't like clothes getting dirty Chapter 6 (89-101) ...read more.

Will was practicing the words for the play George and Will go to the rehearsal together Tom practises the organ Tom plays a song, which reminds him of Rachel Chapter 14 (185-199) Will moves up a class into Mrs Hartidges class Will very pleased about it George walks in pale as brother is reported died Teacher says how well Will has improved in class Will's Mum told him never to ask for help Will gets 8 out of 10 in English test Will's class is stunted at his painting Carrie wants to take a scholarship Will be asked to go back home by mother, as she is ill Chapter 15 (199-218) Will and Tom say there goodbyes and Will gets on the train Mum expecting to see a thin boy Mum not that jolly to see him Mum slaps him for asking to carry her bag Mum never seen Will smile and does not like him doing it Will about to give present but Mum says 'I don't need charity thank you' Mum horrified when Will brings a present of wine Will answers his Mum back Mum very cross at that Mum say that he was wasting other peoples time for learning to write etc... Mum says 'I am sure they where glad to see you go' Mum says that it is rude to ask questions Will feels 'Ill' when his Mum put her arm around him Mum does not what the street to ...read more.

Will and friends go to Spooky Cott. Will and Zach meets a man that lives there Zach stays outside while Will goes in Will is going to have art lessons with that person who lives there The people from London go to Tom's and tell Will that his mother is died Will is told to move into a home but Will says 'This is my home' The people leave and Will is going to be adopted by Tom Chapter 21 (304-313) Will goes back to school Carrie starts her new school Zach is getting worried that he has not spoken to his parents Zach is told his Dad is injured in the navy London has been bombed lots Will finds out that Zach has died and then Will gets unconsciousness Chapter 22 (313-327) Will can't get over the death of Zach Will goes over to Geoffrey's house to find out that his best friend died as well Will is shouting out 'I hate you, I hate you God' Will is calling Tom 'Dad' Will can use Zach's old bike Mrs H has good news that her husband is not dead Will can ride Zach's bike now Will is doing a play and Zach is there in his mind Chapter 23 (329-337) Will and Carrie go down to the river together Will said 'How strange that I was once scared of you' Will said 'Dad, I am growing' ...read more.