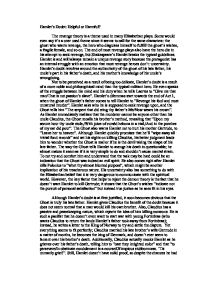 Hamlet's Doubt: Helpful or Harmful? The revenge theory is a theme used in many Elizabethan plays. Some would even say it's a over used theme since it seems to call for the same characters: the ghost who wants revenge, the hero who disguises himself to fulfill the ghost's wishes, a fragile female, and so on. The end of most revenge plays also have the hero die in his attempt to seek revenge, but Shakespeare's Hamlet breaks the typical guidelines. Hamlet is and will always remain a unique revenge story because the protagonist has an internal struggle with an emotion that most revenge heroes don't: uncertainty. Hamlet's doubt revolves around the authenticity of the ghost of his late father, his uncle's part in his father's death, and his mother's knowledge of his uncle's wrongdoing. Not to be perceived as a result of being too delicate, Hamlet's doubt is a result of a more noble and philosophical mind than the typical militant hero. He even speaks of the struggle between his mind and his duty when he tells Laertes to "Give me that man/That is not passion's slave". ...read more.

Hamlet gives Claudius the benefit of the doubt because it does not seem normal that a man would kill his own brother. Also, Claudius has a passive and peacekeeping nature, which rejects the idea of him killing someone. He is such a pacifist that he doesn't even want to start war with young Fortinbras (who wants Claudius to return the lands Hamlet's father took away from Fortinbras); instead, he writes a letter to the King of Norway to try and settle the dispute. Yet everything seems to fit perfectly; Claudius married his late brother's wife Gertrude in a matter of months, he becomes the king of Denmark, and doesn't ever seem to lament over his brother's death. Additionally, Claudius actually mocks Hamlet as he grieves over his father's death, telling him to "cast they knighted color" and that "to persevere/In obstinate condolement is a course/Of impious stubbornness. 'Tis unmanly grief.". Still, Hamlet doesn't have solid proof, so despite the chances he had to kill Claudius, he decides not to commit regicide until he's sure. Although Hamlet finally succeeds in making Claudius show guilt through his play, he still has doubts about one more person: his mother. ...read more.

Although the reader knows that Claudius isn't truly praying, Hamlet believes it so and chooses not to kill him because he doesn't want the Lord to grant him forgiveness, which is what happens if someone dies while repenting. Ironically, Hamlet in turn prevents killings that occur later from being avoided because of his Christianity. On the whole, Hamlet believes in everlasting life and retribution for sins, so he knows that if he has to think his actions and its consequences through because he could suffer in his after life for them. Hamlet's doubt does much more than question the veracity of the Ghost, and the innocence of Claudius and Gertrude. His reluctance to act also shows his lack of understanding about what he is truly fighting for. Hamlet's father knew why he is fighting Fortinbras Sr. to get Fortinbras' properties. Claudius knew why he kills Hamlet's father: to become the King of Denmark and to get Gertrude. However, Hamlet doesn't really know why he's going to kill Claudius and what good will come out of his deeds. He is one of the few heroes who see the bigger picture and not the simple "cause-and-effect" view that is shared by many other protagonists. It's this display of intelligence and morality that makes Hamlet a story that has remained a classic for more than three centuries. ...read more.