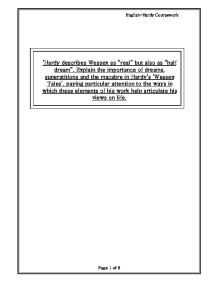 Hardy describes Wessex as &quot;real&quot; but also as &quot;half dream&quot;. Explain the importance of dreams, superstitions and the macabre in Hardy's 'Wessex Tales', paying particular attention to the ways in which these elements

'Hardy describes Wessex as "real" but also as "half dream". Explain the importance of dreams, superstitions and the macabre in Hardy's 'Wessex Tales', paying particular attention to the ways in which these elements of his work help articulate his views on life. Thomas Hardy was born in a time of industrialisation and a time where social hierarchy was the means of order. Hardy sometimes opposed these ideas and so made his opinions through his literature. In 'The Withered Arm', 'The Superstitious Man's Story' and 'Barbara and The House of Grebe', realism is a common genre, he uses this to cast a 'real' place with real people in our minds, at the beginning of his books he has a put a map of Wessex County to make us familiar with the stories adding to the realism of his literature. As well as that he describes Wessex as 'half-dream'. We see this in his stories when he uses superstition, dreams and macabre to show that the stories are unreal yet they all have something significant that lets the readers feel the essence of the story - the morals that he sends us through his writing. In the 'Wessex Tales' he uses these factors to articulate his views on life. His stories that have a moral to them, usually show human folly in times of despair, in 'The Withered Arm' you should not let a physical abnormality take over your life. To survive and succeed in the nineteenth century, superstition must not take over a person's life. All of the examined stories have Hardy's view on life coming out in different ways; he makes his opinion by creating different lives, which have positive and negative effects on the reader. In 'The Withered Arm' we meet Rhoda Brook, a rather tall and 'handsome' lady, who has ended a relationship with Farmer Lodge, who has found a new wife, Gertrude, a 'rosy-cheeked, tisty-tostie little body.' ...read more.

This short story is about death in superstition associated with death and how people react to this information but to add interest Hardy add mystery to grab the readers' attention. Hardy sets the scene by introducing us to William Privett in a spooky almost supernatural way: 'You could feel when came near 'ee...without seeing him' We can tell something peculiar is going to happen to William, Hardy builds up a character that we expect to have a strange aura around him. Hardy prolongs the explanation of the mystery to the end and meanwhile builds up tension by giving us information that does not make sense or we do not pick up on. When the wife is ironing we do not think of anything suspicious, when in fact an important action takes place, William's soul walks out leaving his body in the house, causing great conflict for the wife. When the wife stops to talk to Nancy, Hardy makes the reader assume we know Nancy, by the familiar tone used, because it is a very short story, as only the information she tells Betty is essential. 'She was walking down Longpuddle street...she met Jim Weedle's daughter Nancy.' Betty's information gives the reader an answer to the odd incident, her character is not needed for the story only her words are, and therefore the relative tone Hardy creates. Nancy hints that she saw William Privett enter the church on Midsummer Night and so he would be 'doomed to die.' The fact that she saw Mr. Privett enter the church does not prove anything, the superstition is showing in the countryside as entertainment, this night only comes once a year and so everybody went to view the occasion just like in 'The Withered Arm' when people go to see the 'hand-fair'. Notice the alliteration Hardy uses, this makes it is seem more child-like and more story like. ...read more.

When she declares her love for him-'O Edmund, I am always yours!' rather than the readers feeling sympathy for her, we feel that she has gone insane, this is because she described as statue which creates malevolent figure in our minds. This scene gets even more sinister when Lord Uplandtowers sighs to himself ' "Ha, Ha...this is where my hopes of a successor in the title dissolve."' This is where we know this marriage is definitely over and has no love whatsoever, the words Hardy chooses are significant as the words 'successor,' 'title' and 'dissolve' prove there was no love in the marriage as it was more of a joining of elite class. In conclusion Hardy's view on life mostly is negative, 'The Withered Arm' and 'Barbara of The House Grebe' are pessimistic stories on life, Hardy feels that in most cases life does not work out and that it is very hard to be content as Gertrude and Barbara are. Interestingly in 'The Superstitious Man's story' it is quite the opposite, although it does deal with death it comes out warmth for the reader, superstition is used for recreation rather than a requirement. Fate plays a big part in this story, the characters felt that you could not stop destined future and so no witchcraft could overcome the time of death unlike in 'The Withered Arm' the characters felt if anything went wrong it was to be handled in a non-orthodox way e.g. Gertrude seeking Conjuror Trendle's advice. The key to success in all the characters is to handle everything and let fate run its course. The morals in the stories do relate to the modern world. Vanity is becoming a growing problem and one of the morals was not to let an abnormality control you. The ridiculous superstition of some characters was only because it was a pagan society where science was new, they needed time to accept these new discoveries and move on from their old ways. ?? ?? ?? ?? English-Hardy Coursework Page 1 of 8 ...read more.