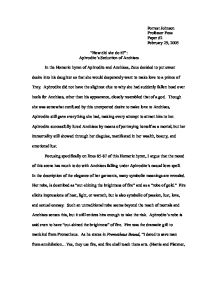 &quot;How did she do it?&quot;: Aphrodite's Seduction of Anchises

Forrest Johnson Professor Foss Paper #2 February 29, 2005 "How did she do it?": Aphrodite's Seduction of Anchises In the Homeric hymn of Aphrodite and Anchises, Zeus decided to put sweet desire into his daughter so that she would desperately want to make love to a prince of Troy. Aphrodite did not have the slightest clue to why she had suddenly fallen head over heels for Anchises, other than his appearance, closely resembled that of a god. Though she was somewhat confused by this unexpected desire to make love to Anchises, Aphrodite still gave everything she had, making every attempt to attract him to her. Aphrodite successfully lured Anchises by means of portraying herself as a mortal, but her immortality still showed through her disguise, manifested in her wealth, beauty, and emotional lust. Focusing specifically on lines 85-87 of this Homeric hymn, I argue that the mood of this scene has much to do with Anchises falling under Aphrodite's casual love spell. In the description of the elegance of her garments, many symbolic meanings are revealed. ...read more.

In addition to Aphrodite's garments, her jewelry, including twisted brooches, shining earrings, and lovely necklaces, also carry supplementary significance. Considering that jewelry is not a naturally formed element, this means it has to be manufactured, and must be made by either mortals or immortals. Jewelry made by mortals is distinguishable from the jewelry made by immortals. In other words, all the shining and shimmering that reflected off of Aphrodite and attracted Anchises was also an obvious indicator that she was not a human. Jewelry made by humans could be depicted from that of immortals by the difference in designs, manufacturing techniques, and even the lack of glow by the ones made by man. With the help of her jewelry, as well as specific explanations of her physical appearance, Aphrodite comes off as innocent and na�ve. Two examples of this are her "shining earrings in the form of flowers" and her "soft throat." Both suggest a sense of fragility, beauty, and delicacy. It seems almost as if Aphrodite is attempting to portray herself as a na�ve little mortal who just wants to play with Anchises. ...read more.

112-117). She mentions to Anchises that Hermes has told her that she would eventually be his lawfully wedded wife, and would bear him "splendid children" (ln. 127). Furthermore, she claims to be an inexperienced virgin (ln. 133). Clearly, Aphrodite wants Anchises badly enough to make up a believable tale and though it does not take much to convince Anchises, it has the ring of a legitimate story. This incident reflects the lengths Aphrodite will go to get what she wants. The fact that Aphrodite convinces Anchises to make love with her is not nearly as interesting as how she actually accomplishes it. Knowing that Anchises is a susceptible mortal, she plans to lure him in. She uses not only her physical beauty to her advantage, but also divine attire and shimmering jewelry. She portrays her power and godliness in such a way that it is not completely apparent to the mortal, but yet must be more than any human woman would have to offer. She tops it off with manipulative words that convince Anchises of her eligibility. In the end, Aphrodite covers up her immortal perfections just enough to seduce successfully Anchises into one of the few divine-human unions not to end in tragedy. ...read more.