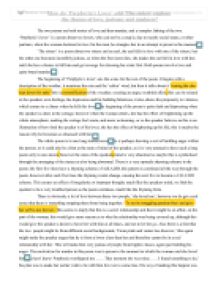 How do 'Porphyria's Lover' and 'The sisters' explore the themes of love, jealousy and madness?

How do 'Porphyria's Lover' and 'The sisters' explore the themes of love, jealousy and madness? The two poems are both stories of love and then murder, and a complex linking of the two. 'Porphyria's lover' is a poem about two lovers, who can not be a couple, due to maybe social status, or other partners, when the woman declares his love for the man, he strangles her in an attempt to preserve the moment. 'The sisters' is a poem about two sisters and an earl, the earl falls in love with one of the sisters, but the other one becomes incredibly jealous, so when the first sister dies, she makes the earl fall in love with her, until she has a chance to kill him and get revenge for choosing her sister first. Both poems involve love and quite brutal murders. The beginning of 'Porphyria's lover' sets the scene for the rest of the poem. It begins with a description of the weather, it mentions the rain and the 'sullen' wind, but then it talks about it 'tearing the elm tops down for spite' this is personification of the weather, creating an angry, troubled effect, this can be related to the speakers own feelings, his depression and his building bitterness, it also shows his propensity to violence, which comes to a climax when he kills his lover. The beginning of the poem is quite dark and depressing when the speaker is alone in the cottage, however when the woman enters, she has the effect of brightening up the ...read more.

just that he sees what he is doing as that right thing to do, so he cant see that it is hurting someone else. 'I propped the head up as before,' he doesn't seem to realise that she is dead, he just carries on as though she is still there, he doesn't realise what he has done. 'And yet God has not said a word,' this seems to suggest that he doesn't think he has done anything wrong, he thinks that because God hasn't done anything then he hasn't done anything wrong. All these quotations suggest that this man was not at all sane, he seems to be amoral, he doesn't think he has done anything wrong. The murder itself is a very gruesome murder, it is not at all pre-meditated, it is just an outburst, 'I found a thing to do,' he thinks he is doing what the woman wanted, as if she had asked him to. 'She guessed not how her darling one wish would be heard,' this again shows strongly that the readers state of mind is not at all normal. After the murder he just sits back down and positions the woman as she was before, he doesn't seem to realise that he has just killed her, he just carries on like nothing has happened, this is another reason why he can be seen as mad. One of the main things about this poem is the speaker's reaction to killing his lover, a crime of passion. ...read more.

Also we see a very deep hatred of the victim in this poem, 'I hate him with the hate of hell,' which was not present in the first poem as the victim was dearly loved by the killer. To be able to hate someone this much for the only reason they loved your sister more than you, gives the impression that not all is well in this persons mind. The actual murder in 'the sisters' is very different to that in the first poem, this murder is pre-meditated, and she knows what she is doing is wrong, however she doesn't seem to care, compared to in the other poem when the murderer doesn't even know that he is doing anything wrong. The difference is that this murderer is immoral, she knows she is doing wrong but doesn't care, compared to the other amoral murderer when he doesn't even know he's doing anything wrong. At the end of the poem it all returns to normal with the weather returning back to how it was at the beginning and the murderer talking in what is considered a normal tone again, this is the same as in the other poem, in which after the murder everything calms down again and the murderer returns to where he was sitting and acts like nothing has happened. I believe that these two poems are quite similar in content and carry the same sort of message as each other, even though there are parts which are quite different, there are also parts which are very similar, and both explore the themes of love, jealousy and madness. ...read more.

This essay begins promisingly, but becomes very descriptive, retelling the events of each poem instead of closely examining the differing techniques used to construct each text and present themes. Be selective at the planning stages of your essay. ***