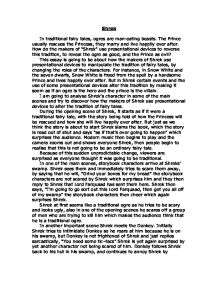 How do the makers of Shrek use presentational devices to reverse this tradition, to reveal the ogre as good, and the Prince as evil?

Shrek In traditional fairy tales, ogres are man-eating beasts. The Prince usually rescues the Princess, they marry and live happily ever after. How do the makers of "Shrek" use presentational devices to reverse this tradition, to reveal the ogre as good, and the Prince as evil? This essay is going to be about how the makers of Shrek use presentational devices to manipulate the tradition of fairy tales, by changing the roles of the characters. For instance, in Snow White and the seven dwarfs, Snow White is freed from the spell by a handsome Prince and lives happily ever after. But in Shrek certain events and the use of some presentational devices alter this tradition by making it seem as if an ogre is the hero and the prince is the villain. I am going to analyse Shrek's character in some of the main scenes and try to discover how the makers of Shrek use presentational devices to alter the tradition of fairy tales. During the opening scene of Shrek, it starts as if it were a traditional fairy tale, with the story being told of how the Princess will be rescued and how she will live happily ever after. ...read more.

realise that this is the opposite of what usually happens in a fairy tale and that the Prince should be in Shreks position. The Princess is disappointed that there was no romantic moment as she had been thinking about when she will be saved and that she wanted it to be romantic. By now other characters see Shrek as very insecure, as he is loving on the inside but does not want to share his feelings for others so he disguises this by trying to act scary. We first catch a glimpse of Lord Farquaad's evil side when we see him torturing the ginger bread man. He laughs and taunts him by saying, "Run, run, run as fast as you can..." the viewers see the irony, as that was one of the ginger bread mans lines and also Lord Farquaads servant has already taken off the ginger bread mans legs. When Lord Farquaad is about to get married to Princess Fiona he uses very formal language when he says, "Beautiful fair flower Fiona will you be the perfect bride for the perfect groom?" in this film we quickly learn that the Prince is no way like a traditional fairy tale character because he seems extremely evil in all ...read more.

The film makers use music and sound effects to create tension and different moods according to each scene and to emphasise what a character is feeling. The Donkey is an important character in the film because he shows us that Shrek is not actually scary but is loving and caring deep inside. In conclusion, the makers of Shrek use presentational devices to reverse the tradition of fairy tales. By increasing the impact of the film, by using lighting, different settings, music and sound effects, to make the true feelings and roles of the characters more blatant. This shows us that a good film is successful not just because of the characters, but also because of the devices that the makers use to influence the viewers. The reversal of a traditional fairy tale, was a touch of pure genius, and is the first time that it has been done in a film, but is also slightly risky because of this. Due to the roles being reversed near the beginning of the film, it surprises the viewers and makes them want to watch on, to see what happens next. I personally think that the role reversals are successful, because it adds a new dimension to the film, with an element of surprise as you do not quite know what will happen next. ...read more.