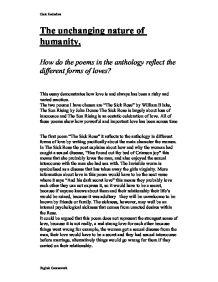 How do the poems in the anthology reflect the different forms of loves?

The unchanging nature of humanity. How do the poems in the anthology reflect the different forms of loves? This essay demonstrates how love is and always has been a risky and varied emotion. The two poems I have chosen are "The Sick Rose" by William Blake, The Sun Rising by John Donne The Sick Rose is largely about loss of innocence and The Sun Rising is an ecstatic celebration of love. All of these poems show how powerful and important love has been across time The first poem "The Sick Rose" it reflects to the anthology in different forms of love by writing pacifically about the main character the women. In The Sick Rose the poet explains about how and why the woman had caught a sexual disease, "Has found out thy ...read more.

knows about them and their relationship their life's would be ruined, because it was adultery they will be unwelcome to be known by friends or family. The sickness, however, may well be an internal psychological sickness that comes from unacted desires within the Rose. It could be argued that this poem does not represent the strongest sense of love, because it is not really, a real strong love for each other because things went wrong for example, the woman got a sexual disease from the man, their love would have to be a secret and they had sexual intercourse before marriage, alternatively things would go wrong for them if they carried on their relationship. ...read more.

This poem explains a strong love for his girlfriend not wanting to leave her sight and comparing her to royalty and having lots of power over things such as the sun, I think this is the best poem because of all the inspirational love poems being said is just nice and has detail in it. I also think that it is quite interesting specially when he compares himself or his girlfriend to nature and royalty. Out of both of these poems the most romantic and loving has got to be The Sun Rising because it expresses his feelings for his girlfriend and nothing can really go wrong with their relationship. Oisin Remedios English Coursework. ...read more.