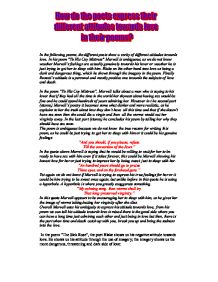 How do the poets express their different attitudes towards love in their poems?

In the following poems, the different poets show a verity of different attitudes towards love. In his poem ''To His Coy Mistress'' Marvell is ambiguous, as we do not know weather Marvell's feelings are actually genuinely towards his lover or weather he is just trying to get her to sleep with him. Blake on the other hand sees love as being a dark and dangerous thing, which he shows through the imagery in the poem. Finally Rosseti's attitude is a personal and mostly positive one towards the subjects of love and death. In the poem "To His Coy Mistress", Marvell talks about a man who is saying to his lover that if they had all the time in the world her shyness about having sex would be fine and he could spend hundreds of years admiring her. However in the second part (stanza) Marvell's poetry it becomes some what darker and more realistic, as he explains to her the truth about how they don't have all this time and that if she doesn't have sex soon then she could die a virgin and then all the worms would eat her virginity away. ...read more.

In the poem "The Sick Rose", the poet Blake shows us his negative attitude towards love. He shows us his attitude through the use of imagery; the imagery shows us the more dangerous, threatening and dark side of love: "And his dark secret love Does thy life destroy." Even in the title of the poem Blake uses imagery to show his attitude towards love and death: "The Sick Rose." This title would be something like rose but Blake is different to any other poet he twists it around to show us his personal attitude towards love. He does this by making the rose sick, both love and death in one, which makes it less romantic but more depressing and sad. This poem is a bit like "To His Coy Mistress." As they are both ambiguous in their own way, however "The Sick Rose." Is alot more ambiguous and confusing as you can only guess the meanings of the imagery that he uses: "The invisible worm That flies in the night." But unlike the other two poems, Blake's is less personal and more general, so that it could be about anyone as the other two poems are quite personal and are more about the writer. ...read more.

Overall Rosseti's attitude towards love is a more personal and positive than both the other poems, she talks about death with no fear and is more concerned about the future and what her partner will do without her. She does this by using small amounts of romantic language, a single piece of imagery and her own personal memories. In conclusion the three poets and poems all have very different attitudes towards and different ways of expressing these attitudes. The first poet was Marvell uses ambiguity to express his mixed attitude towards love, as there is a good side with the loving and companionship, and the bad side where the relationship is split up by time or death. The second poet was Blake. Blake used imagery to shoe us his very negative attitude towards death, as he beieves that love is ultimately doomed, as once again the relationship will be ended by death or time. The last poet was Rosseti. Rosseti used her personal and nostalgic memories to give her positive attitude towards love and unlike the other poems she talks about death with no fear and is more worried about her partner than herself. ...read more.