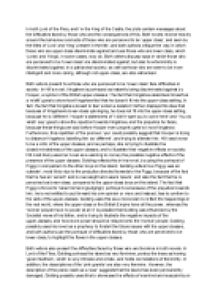 How do the writers present difficulties faced by those who are different in &quot;Lord of the Flies&quot; and &quot;Im the King of the Castle&quot;?

Golding possibly uses his novel as a prophecy to foretell the future issues with the upper classes, and both authors use the portrayal of difficulties faced by those who are perceived to be lower class, to highlight the flaws in the upper classes. Both writers also present the difficulties faced by those who are feminine in both novels. In Lord of the Flies, Golding portrays the island as very feminine, portray the trees as having ?green feathers?, which is very intricate and ornate, and holds connotations of femininity. In addition, the descriptions of the ?pink granite? are also very feminine. However, the description of the plane crash as a ?scar? suggests that the island has been permanently damaged, Golding possibly uses this to showcase the effects of mankind and masculinity on femininity. Furthermore, the image portrayed of the ?the great beard of fire? displays the destructive force and power of masculinity, and the fact that this fire goes on to destroy a large portion of the paradisiacal, feminine forest, goes to show how Golding was most likely aiming to portray the destruction that the abuse of power and mankind can bring. Furthermore, the use of words such as ?eruption? and ?inch by inch? are used to portray the sexually aggressive nature of masculinity, and the way in which females are oppressed in society, which is possibly Golding?s view. ...read more.

Perhaps, Golding is trying to portray the way in which those who have power do not deserve, and that those with true intelligence are not appreciated in society. This is reflected in Hill?s novel to a lesser extent, in the way that Fielding is used by the boys from Warings. Kingshaw says how Fielding is ?mine?, could possibly suggest that Hill is perhaps trying to portray the way in which the upper-classes believe that they own or control the lower classes. Hooper?s learning of Fielding is also essentially the trigger which causes Kingshaw to eventually commit suicide, and so, it is possible that Hill is trying to suggest that those who in fact bring nothing but relief and kindness, and are perceived to be lower-class could possibly be blamed for the consequences of the downfalls of the upper-classes. Hill is possibly trying to illustrate the ways in which the upper classes use the lower classes, and blame them for the various shortcomings of the upper class. Both writers here are essentially criticising the upper classes, for discriminating against those who are technically more intelligent or more caring than them Overall, both authors present the various ways in which people who are different face difficulties, and perhaps, they are trying to criticise the British upper classes, government and Empire for these various issues. ...read more.