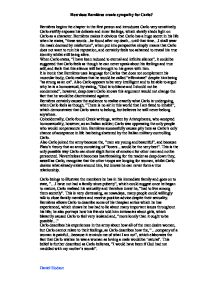 How does Bernires create sympathy for Carlo?

Berni�res begins the chapter in the first person and introduces Carlo very sensitively. Carlo swiftly exposes his delicate and inner feelings, which slowly sheds light on Carlo as a character. Berni�res makes it obvious that Carlo has a huge secret in his life when he states, "these words...be found after my death...until that time...I shall wear the mask decreed by misfortune", when put into perspective simply means that Carlo does not want to ruin his reputation, and certainly feels too ashamed to reveal his true identity whilst still being alive. When Carlo states, "I have been reduced to eternal and infinite silence", it could be suggested that Carlo feels as though he can never speak about his feelings and true self, and feels that this silence will be brought to his grave with him. It is ironic that Berni�res uses language for Carlos that does not complement his muscular body, Carlo realises that he would be called "effeminate" despite him being "as strong as an ox". Also Carlo appears to be very intelligent and to be able to argue why he is a homosexual, by stating, "God is to blame and I should not be condemned", however, deep down Carlo knows this argument would not change the fact that he would be discriminated against. ...read more.

This belief is further described as Carlo believes, "I would have been if God had not meddled with my mother's womb". Carlo begins to make it clear that he is having a hard time physically, aswell as mentally, and within the army he is constantly being moved from one unit to the next, which doesn't even give Carlo the chance to make comrades, this is supported when Carlo states, "no...developing any Esprit de corps", which means friendship within a group and 'group spirit'. Berni�res describes Carlo's new experiences within his new unit 'Julia Division', as being very positive when Carlo states, "I enjoyed every moment", Berni�res goes on to deepen the optimistic description from Carlo's point of view by stating, "regardless of...sex, soldiers grew to love each other". However, this was not the form of love Carlo wanted, as this 'love', only existed in the army and not in civil life, it was companionship. Linking to the following suggestion, Carlo declares, "You come to know every nuance of each others' moods...know...what the other is going to say", however all of this is known because Carlo and his fellow soldiers live and work together because they have to. Berni�res seems to present Carlo in a new light, but Carlo felt his life was becoming very pointless when he states, "What spoiled it... ...read more.

When the '"fishy" orders are given to Carlo and Francesco, Francesco knows something is wrong, but Carlo just sees them as orders that need to be followed. Carlo seems to feel confident and invincible as he gazed into Francesco's, "beautiful dark eyes..." As the men crept out on the mission under cover of darkness, Carlo began to realise that he wanted to protect Francesco as a lover would do. Also, as potential danger nears them, Carlo realises that he could possibly lose the one person he loves intensely in a split second. As the two men heard the "horrifying silence" after the attack on the tower, both men looked at each with a smile; however both looked smiled with sorrow because of the atrocities that had just occurred in the, "horrible madness of desperate action". Carlo and Francesco soon realise that they were supposed to be killed to start a, "little war with Greece". This is demoralizing for both men, aswell as the audience as they have killed their own comrades in a state of terror, each side believing the other was the enemy. Overall, Berni�res accumulates a huge amount of sympathy for Carlo, mainly due to the isolation that Carlo suffers. Despite Carlo being part of a team in the army; he still manages to feel mentally secluded due to his homosexuality. How does Berni�res create sympathy for Carlo? Daniel Hodson ...read more.