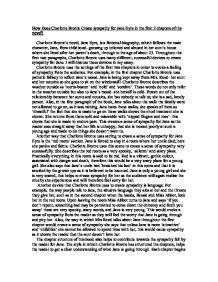 How does Charlotte Bronte create sympathy for Jane Eyre in the first 2 chapters of the novel?

How Does Charlotte Bronte Create sympathy for Jane Eyre in the first 2 chapters of the novel? Charlotte Bronte's novel, Jane Eyre, is a fictional biography, which follows the main character, Jane, from childhood- growing up unloved and abused in her aunt's house where she lived after her parent's death, through to the age of about 23. Throughout the first two paragraphs, Charlotte Bronte uses many different, successful devices to create sympathy for Jane. I will discuss these devices in my essay. Charlotte Bronte uses the settings of the first two chapters in order to evoke a feeling of sympathy from the audience. For example, in the first chapter Charlotte Bronte uses pathetic fallacy to reflect Jane's mood. Jane is being kept away from Mrs. Reed- her aunt and her cousins so she goes to sit on the windowsill. Charlotte Bronte describes the weather outside as 'storm-beaten' and 'cold' and 'sombre'. These words do not only refer to the weather outside but also to Jane's mood- she herself is cold- frozen out of the relationship between her aunts and cousins, she has nobody to talk to; she is a sad, lonely person. ...read more.

For example, the way people talk to Jane, the abusive language they aim at her and the threats they give her, such as in the second chapter when the maids, Bessie and Miss Abbot, lock her in the red room. Upon leaving the room Miss Abbot turns to Jane and says 'if you don't repent, something bad may be permitted to come down the chimney and fetch you away' these are very spooky, scary words, and Jane is very young. This would evoke a sense of sympathy from the reader as they will feel the worry that Jane is going through and pity her. Also, the way in which Mrs Reed talks about Jane throughout the first chapter would create a sense of sympathy she says that unless Jane is more 'attractive' and 'childlike' she cannot be allowed to spend time with her, this would cause sympathy as it shows the reader that the aunt doesn't love her. The chapter structure of this book also helps to contribute towards the sympathy felt by the reader for Jane. ...read more.

Jane Eyre's uncle, the owner of Thornfield Hall and the father of the family, loved Jane and wanted to take care of her, but when he died, Jane's aunt became owner of the house and the ruler of the family. She did not love Jane, and resented taking care of her, only doing so because she had promised Jane's uncle that she would. Also, as Jane was now of no blood relation to Mrs. Reed or her children, Jane was no longer part of the family, she did not pay her way, and is therefore lower and poorer than the servants, a fact that she is reminded of in the first 2 chapters of the book, 'if she (Mrs. Reed) were to turn you off, you would have to go to the poorhouse.' This is because the Victorian ideal of a child was 'seen but not heard'; they were pretty children and were happy. Jane refers to herself as 'plain' in the text and is also very feisty, intelligent and brave; her aunt does not like this, so she does not fit in with the family. This would evoke a sense of sympathy for Jane as she is a stranger in her own home with nowhere to go and nobody to love or care for her. ...read more.