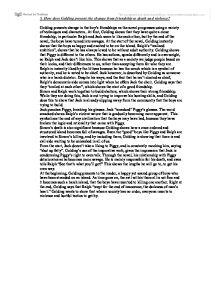 How does Golding present the change from friendship to death in Lord of The Flies?

5. How does Golding present the change from friendship to death and violence? Golding presents change in the boy's friendships as the novel progresses using a variety of techniques and characters.. At first, Golding shows that they have quite a close friendship, in particular Ralph and Jack seem to like each other, but by the end of the novel, the boys have turned into savages. At the start of the novel, Golding instantly shows that the boys as happy and excited to be on the island. Ralph's "realized ambition", shows that he has always loved to be without adult authority. Golding shows that Piggy is different to the others. ...read more.

Golding says that they "smiled at each other", which shows the start of a good friendship. Simon and Ralph work together to build shelters, which shows their strong friendship. While they are doing this, Jack is out trying to improve his hunting skills, and Golding does this to show that Jack is already slipping away from the community that the boys are trying to build. Jack punches Piggy, breaking his glasses. Jack "smacked" Piggy's glasses. The word smacked shows Ralph's violent nature that is gradually becoming more apparent. This symbolizes the end of any civilization that the boys may have had, because they have broken the logic and rationality that came with Piggy. ...read more.

Through the novel, his relationship with Piggy deteriorates as he becomes more savage. He is mainly responsible for his death, and even tells Ralph "See that's what you'll get!" This shows the lengths he will go to, to get his own way. At the beginning, Golding presents to the reader, a happy yet scared group of boys who have been stranded on an island. As time goes on, the evil within them all is set free and it becomes such a harsh island, that the boys have resorted to killing one another. Right at the end, Golding says that Ralph "wept for the end of innocence, the darkness of man's heart." Golding wants to show that when a society has no order, everyone resorts to violence and hurtful tactics to get by. ...read more.

The response to this question is basic systematic and therefore covers an enormous amount of analysis that is entirely orientated around the proposed question with very little extra frills. There is nothing wrong with this, as the question has been ...

The response to this question is basic systematic and therefore covers an enormous amount of analysis that is entirely orientated around the proposed question with very little extra frills. There is nothing wrong with this, as the question has been answered in a very well-informed level of depth, but it does limit the extent to which the candidate can show extra knowledge. In this case however, the analysis covers such a diverse range of interpersonal relationships within the novel and symbolic merit of the interactions between them and what it shows us about the characters and the direction Golding wants to take us in.

The Level of Analysis covers practically every main relationship Golding emphasises. What could be included to further fortifiy the answer though are comment about Roger's involvement in the novel, just to make sure there is extra content because whilst this answer shows an astute understanding of the allegorical impact of 'Lord of the Flies', there are no spare words anywhere - making the answer very short and it gives the impression that the candidate is speaking from memory, rather than providing insightful analysis that full comprehends the value of the text.
The use of quoting helps the value of the answer greatly. Without quotes, students are not making valid analyses. This candidate has used an abundance of quotes from the source text and embeds them in their answer so the sentences flow easily, without disrupting the flow of the read. This is a skill that all candidates should aim to use as it is indiciative of careful planning and confidence in writing - something examiners love to see.
Also, an opening paragraph about the plot of the book might be a useful contributory factor to perfecting the standard analytical structure. Without it, the essay appears to dive straight in without preparing the examiner nor directly addressing the question proposed. It is usewals useful to refer, in not so many words, to the question candidates are aiming to answer as it shows dedication to a specific point (the question steer) and also helps keep candidate from diverging off of their path during an exam, because they can refer back to what exactly it is they are trying to do in their response.

The Quality of Written Communication (QWC) is fine. There is an adept use of syntax and sentence structure to vary the answer and keep it interesting - it also feels more personal when writing like this. However, the punctuation used is very basic (full stops, commas, quotation marks), and so a wider range of punctuation points would improve the QWC mark because it would show examiners a candidate who knows how to use a complex variety of tools to create their answer.