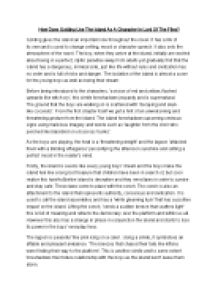 How Does Golding Use The Island As A Character In Lord Of The Flies?

﻿How Does Golding Use The Island As A Character In Lord Of The Flies? Golding gives the island an important role throughout the novel. It has a life of its own and is used to change setting, mood or character speech. It also sets the atmosphere of the novel. The boy, when they arrive at the island, initially are excited about being in a perfect, idyllic paradise away from adults yet gradually find that the island has a dangerous, inimical side, just like life without rules and civilization has no order and is full of risks and danger. The isolation of the island is almost a curse for the young boys as well as being their dream. Before being introduced to the characters, ?a vision of red and yellow, flashed upwards like witch cry?, this simile foreshadows jeopardy and is supernatural. The ground that the boys are walking on is scattered with ?decaying and skull-like coconuts?. From the first chapter itself we get a hint of an unwelcoming and threatening gesture from the island. ...read more.

However this also has a change in phase in conjunction the island and starts to lose its power in the boys? everyday lives. The lagoon is peaceful ?like pink icing on a cake?. Using a simile, it symbolises an affable and pleasant ambiance. ?The breezes that chased their tails like kittens were finding their way to the platform?. This is another simile and to some extent foreshadows their future relationship with the boys as the island won?t leave them alone. Animals on the island get victimized by the hunters. An example of this is in Chapter 8 during the pig killing. When killing the pig it is described in a sexual manner and is a horrific symbol of how fat the violence of the boys has come. This emphasises the Bible story of the Fall of the Man when Adam and Eve are were cast out of the Paradise as a punishment for disobeying God. This island becomes a terrible waste of land from a heavenly paradise, as if it is a punishment for all the sins the boys have committed whilst on the island. ...read more.

Even the food that is available on the island can sometimes be perfect ?everywhere was the scent of ripeness?, it makes the island feel warm and homely but this also leads to a dark side as ?there was now stomach-aches and chronic diarrhoea?. Throughout Lord of the Flies, there is depth in the imagery and how it affects the readers? response. The weather is a tool that is used to change the readers? response. Throughout the day it is described as ?golden sun? and there is no conflict from the sea as it is calm, however in the more denser and scarier parts of the island, it is dark and scary and is ?pitch black? and there is always a sea storm. The weather symbolise the boys? mood as well as helping the reader picture what is going on in detail. We realize that the naivety and innocence of the boys makes the island bad, but nearer to the end of Lord of the Flies, we see that the anger and hatred of the island influences on the boys and slowly they turn into savages and forget the path of humans and society. ...read more.