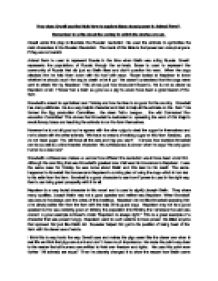 How does Orwell use the fable form to explore ideas about power in Animal Farm?

How does Orwell use the fable form to explore ideas about power in Animal Farm? Remember to write about the society in which the stories are set. Orwell wrote this play to illustrate the Russian revolution. He used the animals to symbolise the main characters in the Russian Revolution. The moral of this fable is that power can corrupt anyone if they are not careful. Animal Farm is used to represent Russia in the time when Stalin was ruling Russia. Orwell represents the populations of Russia through the animals. Boxer is used to represent the community of Russia that did just as Stalin liked and didn't question his word. When the dogs attacked him he held them down with his hoof with ease. "Boxer looked at Napoleon to know whether he should crush the dog to death or let it go." He doesn't understand that the dogs were sent to attack him by Napoleon. This shows just how imprudent Boxer is. He is not as clever as Napoleon at all. If Boxer had a brain as good as a pig he would have been a great leader of the farm. ...read more.

When Snowball was around he always won the votes of the meetings. Napoleon did not like Snowball opposing him o he simply exiled him from the farm with the help of his guard dogs. Napoleon may not be a good speaker but he was certainly good at tricking the population into thinking that whatever he said was correct. A good example is Boxer's motto "Napoleon is always right!" This is a great example of a character that was power hungry. Napoleon went to such extents to have power. He killed anyone that opposed him just like Stalin did. Squealer helped him get to his position of being head of the farm with his clever use of words. I think this is very ironic the way Orwell uses and makes the pigs seem like the clever one when in real life we think that pigs are dumb and don't have much importance. He made his point very clear to the reader that all humans are entitled to their own freedom and rights. He uses this point even further. ...read more.

We see how the tyrant, Napoleon makes Snowball seem like an evil, manipulating and corrupt character when the real evil person is himself. Dictators like to rewrite history in order to flatter themselves and that is exactly what Napoleon did. He awarded himself two awards for bravery and claimed that the windmill was all his idea and how Snowball had stolen it from him. He also says how the victory of the Battle of the cowshed was all thanks to him and Snowball takes all his credit. "And do you not remember, too, ... Napoleon sprang forward with a cry "Death to humanity!" and sank his teeth in Jones's leg? Surely you remember that, comrades?" exclaimed Squealer frisking from side to side". This shows how well Squealer manipulates the animals' thoughts and memories. Weighing up the evidence we can see that this fable doesn't use characters that behave in a realistic way but are symbolic of certain attitudes. Although unlike most fables, the ending of Animal farm is ambiguous. There is no clear sense of how life will turn out for the animals. Even though no clear moral is stated Orwell's message throughout the text is clear. ...read more.

A good piece of analysis that considers many of the links between the book and its characters and how they are used to represent Communist Russia.
Although considering this comparison, I would like to see more specific analysis of language, structure and form and links made within the text.