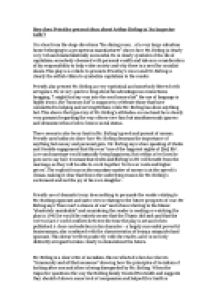 Transfer-Encoding: chunked ﻿How does Priestley present ideas about Arthur Birling in ?An Inspector Calls?? It is clear from the stage directions ?the dining room?of a very large suburban home belonging to a prosperous manufacturer? shows how Mr. Birling is clearly very rich and materialistically successful. He is clearly symbolic of the ills of capitalism; somebody obsessed with personal wealth and takes no consideration of his responsibility to help wider society and why there is a need for socialist ideals. This play is a vehicle to promote Priestley?s views and Mr. Birling is clearly the selfish villain to symbolize capitalism to the reader. Priestly also present Mr. Birling as very egotistical and somebody littered with arrogance. He is very quick to brag about his advantageous connections; bragging, ?I might find my way into the next honors list? the use of language is highly ironic, the ?honours list? is suppose to celebrate those that have committed to helping and serving Britain; while Mr. ...read more.

The explicit focus on the mundane matter of money is at the speech’s climax, making it clear that this is the underlying reason for Mr. Birling’s excitement and not the joy of his own daughter. Priestly use of dramatic Irony does nothing to persuade the reader relating to Mr. Burlings ignorant and naïve views relating to the future prospects of war. Mr Birling says “there isn’t a chance of war” and when referring to the titanic “absolutely unsinkable” and considering the reader is reading or watching the play in 1945 he would be entirely aware that the Titanic did sink and that the were in fact 2 world conflicts between the time the play is set and when published. A clear contradiction in his character - a hugely successful powerful businessman, also combined with the characteristics of being a misguided and ignorant. ...read more.

Mrs. Birling very rarely shows the slightest ounce of sympathy for Eva Smith. Once realizing about the death of Eva Smith and asked if he discharged her, he showed no sympathy stating, ?Yes. The girl had been causing trouble in the works. I was quite justified? the way he avoids the notion he is anyway responsible doesn?t reflect well and only conveys Mr. Birling in a selfish negative light. This continues throughout the play, once he realizes the ?man definitely wasn?t a police inspector at all,? he suggests ?in fact, it makes all the difference? this reflects that how once the threat of Mr. Birling?s reputation and all the connotations that would of have on himself and his family briefly diminishes, he suggests that everything has ?changed? and still reflects the idea that he is not responsible or even shows a sign of changing his approach towards his work force. ...read more.