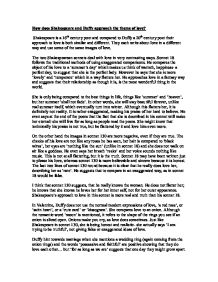 How does Shakespeare and Duffy approach the theme of love?

How does Shakespeare and Duffy approach the theme of love? Shakespeare is a 16th century poet and compared to Duffy a 20th century poet their approach to love is both similar and different. They each write about love in a different way and use some of the same images of love. The two Shakespearean sonnets deal with love in very contrasting ways. Sonnet 18 follows the traditional methods of using exaggerated comparisons. He compares the object of his love to a 'summer's day' which makes us think of warmth, happiness- a perfect day, to suggest that she is the perfect lady. However he says that she is more 'lovely' and 'temperate' which in a way flatters her. He approaches love in a fantasy way and suggests that their relationship as though it is, is the most wonderful thing in the world. She is only being compared to the best things in life, things like 'summer' and 'heaven', but her summer 'shall not fade'. ...read more.

Sonnet 18 may have been written just to please his love, whereas sonnet 130 is more believable and sincere because it is honest. The last two lines of sonnet 130 round because it is clear that he really does love her, describing her as 'rare'. He suggests that to compare in an exaggerated way, as in sonnet 18 would be false. I think that sonnet 130 suggests, that he really knows the woman. He does not flatter her; he knows that she knows he loves her for her inner self, not for her outer appearance. Shakespeare's approach to love in this sonnet is more real and truth than his sonnet 18. In Valentine, Duffy does not use the normal modern expressions of love, 'a red rose', or 'satin heart', or a 'cute card' or 'kissogram'. She compares love to an onion. Although the romantic word 'moon' is mentioned, it refers to the shape of the rings you see if an onion is sliced open. ...read more.

She is not sure what she wants, is it 'pleasurable' or 'sad'. The 'dark hills' are the barriers, which are preventing her from being with the person her loves. This could be because they are physically a long way apart or, have little in common mentally or emotionally. This poem 'Words, Wide Night' is ' an impossible song of desire that you cannot here', suggesting that their love will never come to anything as her 'lover' if he exists, will never understand her, or even read this poem. This is different to the end of Shakespeare's sonnet18, where the poem was written to keep the lover alive forever. Duffy and Shakespeare approach love in similar ways both mentioning things such as the moon although each in a different context. Duffy gives an impression through both her poems that love is too hard to be described and really isn't just wonderful, basically telling the truth as Shakespeare did in sonnet 130. However he didn't tell the truth in sonnet 18 although it is a very flattering poem. ...read more.