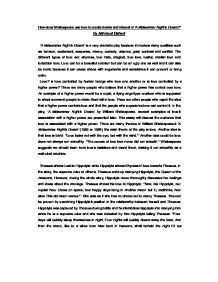 How does Shakespeare use love to create drama and interest in 'A Midsummer Night's Dream?'

How does Shakespeare use love to create drama and interest in 'A Midsummer Night's Dream?' By Mahmoud Elsherif 'A Midsummer Night's Dream' is a very dramatic play because it involves many qualities such as: tension, excitement, suspense, misery, comedy, violence, grief, contrast and conflict. The different types of love are: shyness, true hate, magical, true love, lustful, marital love and forbidden love. Love can be a beautiful emotion but can be an ugly one as well and it can also be ironic because it can cause chaos with arguments and sometimes it can prevent or bring order. Love? Is love controlled by human beings who love one another or is love controlled by a higher power? There are many people who believe that a higher power has control over love. An example of a higher power would be a cupid, a flying angel-type creature who is supposed to shoot arrows at people to make them fall in love. There are other people who reject the idea that a higher power controls love and that the people who experience love can control it. In the play, 'A Midsummer Night's Dream', by William Shakespeare, several examples of love's association with a higher power are presented later. This essay will discuss the evidence that love is associated with a higher power. ...read more.

Lysander told Hermia: '"The course of true love never did run smooth.''' And "'So quick bright things come to confusion."' Her father's anger causes Lysander and Hermia to run away, and be followed by Helena and Demetrius. The couples then end up in the Enchanted Forest where a whole series of events that mix up the lovers occur. Helena follows Demetrius around even though he is horrible to her, Helena shows the loyalty of love, the determination of love and the attraction of an obsessive rejecting partner, but there are some things that love can do, like causing pain in love and love can make a fool of you. She acts like an obedient dog and she will take any beating just for love: '"And even for that do I love you more. I am your spaniel,"' and '"For I am sick when I do look on thee."' The audience will find Helena a nuisance and Demetrius as a heartless man. After everything returns to normal, the couples return to Athens. Interestingly, Lysander and Hermia end up marrying. The fact that Lysander and Hermia got married proves that love can also defeat a higher power. Hermia defied her father, the higher power and still ended up marrying the man that she wanted. The audience will like this part because it shows love cannot be controlled. ...read more.

And Thisbe finds him and then she commits suicide to stay with Pyramus '"Come blade, my breast imbrue... Thus Thisbe ends Adieu, adieu, adieu"' the ending is like Romeo and Juliet because Pyramus presumes Thisbe is dead, then he kills himself and Thisbe because she finds him dead and kills herself. The audience will be laughing, because of the ridiculous situation. Shakespeare suggests that love is controlled and not controlled in this part it's controlled in the house and it's not when they leave the house to go to Ninny tomb. In conclusion, all of the above paragraphs dealt with examples proving that love can be associated to a higher power. A higher power in definition is any being or group of beings that have direct control over the actions of another being. Two of the examples showed how a higher power can control love and one of the examples showed how love can defy a higher power and prevails, also one in the middle. In any case, it has been proven that a higher power does exist when dealing with love. Many people have wondered what love really is and how love develops between people. Even if love isn't associated with a higher power in life, it is a strange phenomenon and so far the association of love with a higher power is a valid suggestion as it was proven in the story, "A Midsummer Night's Dream" that's why it has created drama and interest because of the higher power in love. ...read more.