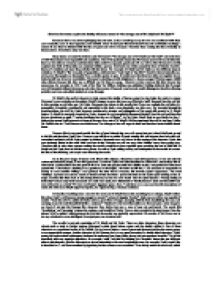 How does Stevenson explore the duality of human nature in the strange case of Dr Jekyll and Mr Hyde?

How does Stevenson explore the duality of human nature in "the strange case of Dr Jekyll and Mr Hyde"? Stevenson had a very strict upbringing from the start. In fact I would go to say he was over smothered with ideas and eventually came to hate hypocrisy and rebelled. Since he had just liberated himself from his Calvinistic teachings I assume it was then he debated with the idea of good and evil in everyone. Therefore then creating the idea of duality in human nature. It was then a story was born. Many issues are raised by Robert Louis Stevenson's "The strange case of Dr Jekyll and Mr Hyde" and at the time of 1885 these issues were impossible and scandalous. One of the particular issues that Stevenson uncovered was the idea that there are two sides to everyone and that these sides could be separated, good and evil. As well as this Stevenson's novella explores how both of these sides are contained within a person. This book was written around the time of Charles Darwin's theory of evolution and story fits perfectly with his theory. For example, Dr Jekyll and Mr Hyde are two different steps in evolution. Dr Jekyll is "the very pink of proprieties, celebrated too." And Hyde is "ape like". Darwin's theory basically was set to prove that people are descended from a similar species to apes. ...read more.

The word 'loathing' expresses an extreme extent of hatred and the fact that a person felt that for Mr Hyde upon looking at him is tragic. But then this links back to him being deformed, in fact it is even stated that Mr Hyde donates a "strong feeling of deformity" in fact many harsh comments are made over Hyde, he is illustrated as "hardly human", "pale and dwarfish" and even referred to as a devil, "if I ever read Satan's signature upon a face..." and there are many more horrific descriptions of Hyde, but at the same Jekyll enjoys having him, he enjoys having a vicarious existence. Eventually everything takes a turn for the worst and Dr Jekyll learns that something has to change, Jekyll realises this when Hyde's evil becomes strong enough to commit "a crime of singular ferocity", Hyde was so evil he was capable of murder. "And then all of a sudden he broke out in a great flame of anger, stamping with his foot, brandishing the cane, and carrying on (as the maid described it) like a madman." 'Madman' is the word that strikes me first and puts a clear image in my head of not just the Scrooge like character from before but now a man of pure sin and hatred. The words like 'brandishing' and 'stamping' exposes the madness and brutality of Hyde. ...read more.

To begin with Jekyll is not overcome with doubt or guilt or even much emotion, no matter how atrocious. He distances himself and pretends that nothing is wrong, much like in 'Lord of the Flies' when Ralph and Piggy refuse to take responsibility for their part Simon's death. But as time goes on Dr Jekyll begins to realise the horror of what is going and on, as well as becoming weaker, while Hyde becomes stronger and somehow it still takes a while for Jekyll to try and let Hyde go. This poses the question; did Jekyll have a deeper more devious yearning for Hyde other than scientific truth? Dr Jekyll admits to in his 'final confession' which is the last chapter in the book. The message is clear and could be depicted by anyone; therefore this would have been shocking to a Victorian. Everyone does have the potential to be good or evil. But it is up to a person what is done with evil in us all, however the extremes of a personality may not be as bold as in this novella. The story does make you think, if anyone is capable of evil, what am I capable of? If my life is a constant battle between the good and evil in me, then how do I know if I myself have the strength to conquer the evil within? And I think it is these questions that Stevenson wanted people to ponder. ...read more.