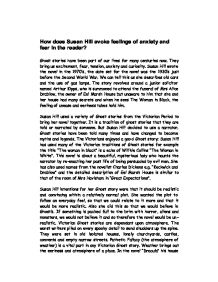 How does Susan Hill evoke feelings of anxiety and fear in the reader?

How does Susan Hill evoke feelings of anxiety and fear in the reader? Ghost stories have been part of our lives for many centuries now. They bring us excitement, fear, tension, anxiety and curiosity. Susan Hill wrote the novel in the 1970's, the date set for the novel was the 1930's just before the Second World War. We can tell this as she describes old cars and the use of gas lamps. The story revolves around a junior solicitor named Arthur Kipps, who is summoned to attend the funeral of Mrs Alice Drablow, the owner of Eel Marsh House but unaware to him that she and her house had many secrets and when he sees The Woman in Black, the feeling of unease and eeriness takes hold him. Susan Hill used a variety of Ghost stories from the Victorian Period to bring her novel together. It is a tradition of ghost stories that they are told or narrated by someone. But Susan Hill decided to use a narrator. Ghost stories have been told many times and have changed to become myths and legends. The Victorians enjoyed a good Ghost story; Susan Hill has used many of the Victorian traditions of Ghost stories for example the title "The woman in black" is a echo of Willkie Collins "The Woman in White". This novel is about a beautiful, mysterious lady who haunts the narrator by re-enacting her past life of being persuaded by evil men. She has also used names from the novelist Charles Dickens e.g. "Keckwick and Drablow" and the detailed description of Eel Marsh House is similar to that of the room of Mrs Havisham in "Great Expectations". Susan Hill intentions for her Ghost story were that it should be realistic and convincing within a relatively normal plot. She wanted the plot to follow an everyday feel, so that we could relate to it more and that it would be more realistic. Also she did this so that we would believe in Ghost's. ...read more.

Arthur says, "I was by now almost pigheadedly bent upon following my course." This maybe an implication that be an influence of some kind as if he had lost all sense of free will. We wonder why on earth he wants to go there after all that has happened to him. Away Susan Hill sustains interest is by the use of contrast. This is sustained throughout the book and is away of keeping the reader interested and still active in the book. The chapter called "Spider" is a happy oasis in the doom and gloom from the horrors of Eel Marsh House. It brings normality into the novel and so that we still do continue to believe the plot. He is optimistic and cheerful and ready to do battle. He does not believe that the ghost can do any harm to him. He is oblivious to what the rest of the town know because he doesn't think that the ghost can do any harm to him. "Ignorance is bliss" to Arthur, he doesn't believe the ghost can hurt him and so there for believes that he is not in danger and does not have to worry. Susan Hill creates eeriness in the beginning of the chapter "In the nursery" by emphasising how cut of and isolated Arthur is. " If I had left anything important behind, I could not return to fetch it for several hours." This gives the reader a slight hint that something drastic or frightening is about to happen and Arthur could not run away from it. Susan Hill has used the dog "Spider" to add realism and suspense. Even Spider who is in a state of shock and therefore making the reader believe in the supernatural. " Spider took a couple of steps backwards, half lifted her front paws off the ground and began to howl." Also in this chapter she builds up curiosity in the reader we find out that Arthur has found some letters about giving up a child for adoption and then he goes on to find some death certificates. ...read more.

Spider gives him the courage and love that he is missing from other people. Susan Hill using the dying character as a child has a psychological effect on the reader and on Arthur, it is more distressing to hear the sound of a "screaming" "Crying" sound of a desperate child in need then it would be for an adult. This mentally affects Arthur as he starts to picture the desperate struggle of the child and keeps playing on his mind. The noises affect the reader emotionally as they feel upset for this dying and also plays on their mind and every time the narrator tells us about it, it becomes very distressing. Throughout the play she has created a climax by giving us hints and clues given by characters, sightings of the ghost building up the climax and suspense. Then she lets the tension and suspense die down in the beginning of the Chapter "The woman in Black" Everything is going well for him, he married Stella and then later on had a son. She describes "a peaceful, happy, Sunday afternoon in summer" in the park, we get the sense of happiness and enjoyment and Arthur has finally forgot Eel Marsh House. His wife and son go on a pony and trap ride as he watches them and then he sees the woman in Black and now we think that something bad is about to happen, then she steps in front of the pony and the trap and pony hit a tree killing Stella and his baby son. Using the enjoyment and peaceful atmosphere, she has surprised us right until the very end and using the happy atmosphere ended it with evil and ending the novel with sadness, tension and anxiety. Using all of these techniques Susan Hill has sustained tension and anxiety in the reader throughout the novel and using all of these techniques has written an excellent ghost story! By Matthew Syner 10SG ...read more.