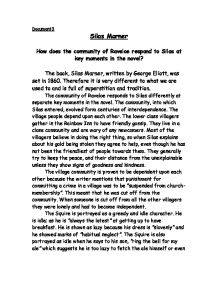 Document3 Silas Marner How does the community of Raveloe respond to Silas at key moments in the novel? The book, Silas Marner, written by George Eliott, was set in 1860. Therefore it is very different to what we are used to and is full of superstition and tradition. The community of Raveloe responds to Silas differently at separate key moments in the novel. The community, into which Silas entered, evolved form centuries of interdependence. The village people depend upon each other. The lower class villagers gather in the Rainbow Inn to have friendly gossip. They live in a close community and are wary of any newcomers. Most of the villagers believe in doing the right thing, so when Silas explains about his gold being stolen they agree to help, even though he has not been the friendliest of people towards them. They generally try to keep the peace, and their distance from the unexplainable unless they show signs of goodness and kindness. The village community is proven to be dependent upon each other because the writer mentions that punishment for committing a crime in a village was to be "suspended from church-membership". This meant that he was cut off from the community. When someone is cut off from all the other villagers they were lonely and had to become independent. ...read more.

They also thought of him as being a "dead man come to life again" when he went into one of his trances. They thought it was his soul leaving his body for a while. Silas's medical condition made the villagers even more wary of him; his knowledge of herbs and charms did not help either. When Silas "cured" a woman by the name of Sally Oates, from a heart condition the villagers thought it was worth "speaking fair" to him. They spoke politely to Silas to keep him from cursing them. Silas drove "one after another" of the villagers away when they asked him to cure them of their imperfections or colds. Because of this the villagers who had an accident after applying to him "set the misfortune down to Master Marner's ill-will and irritated glances". This heightened the "repulsion" between Silas and his neighbours, which made him even more, isolated than before. The village community of Raveloe responds to the robbery by helping Silas. When he appeared in the Rainbow Inn, the villagers shared the "general alarm". Silas accused Jem Rodney of the theft and was soon proven wrong when the villagers agree that Jem had been with them in the pub since before Silas left his house. ...read more.

This is shown when the doctor and his wife, Mrs Kimble, question his decision to keep her. He could be considered being treated like a child in a way that he would be incapable to care for Eppie himself. Like a child is unable to care for a pet all by itself. Silas, otherwise known as Master Marner, is gradually integrated into the community from this time, having spent 15 years being seen as an outsider, because the other villagers try to help him look after Eppie. Dolly lends him Aaron's baby clothes, and Godfrey helps by giving some money to Silas, for Eppie. The villagers' feelings are influenced in his favour by the fact Silas insists on keeping the child. Everyone's experience of child rearing gives him or her links with Silas, so he is welcomed into the community through Eppie. Silas begins to take part in the community by making conversation with the villagers and by taking their advice and getting Eppie christened. The village is so isolated from the rest of the World because in the 19th century very few people travelled or communicated with people outside of their community. Most people were not very well educated at this time and therefore knew little about health problems. They tried to explain things that they knew nothing about by saying it was something to do with the supernatural. Many people were superstitious and thought that this was the only reasonable explanation in the 19th century. ...read more.