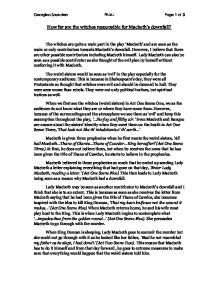 How far are the witches responsible for Macbeth's downfall?

How far are the witches responsible for Macbeth's downfall? The witches are quite a main part in the play 'Macbeth' and are seen as the main or only contributors towards Macbeth's downfall. However, I believe that there are other possible contributors including Macbeth himself. Lady Macbeth can also be seen as a possible contributor as she thought of the evil plan by herself without conferring it with Macbeth. The weird sisters would be seen as 'evil' in the play especially for the contemporary audience. This is because in Shakespeare's day, they were all Protestants so thought that witches were evil and should be damned to hell. They were seen worse than rebels. They were not only political traitors, but spiritual traitors as well. When we first see the witches (weird sisters) in Act One Scene One, we as the audience do not know what they are or where they have come from. However, because of the surroundings and the atmosphere we see them as 'evil' and keep this assumption throughout the play, '...the fog and filthy air.' Even Macbeth and Banquo are unsure about the sisters' identity when they meet them on the heath in Act One Scene Three, 'That look not like th' inhabitants o' th' earth...' Macbeth is given three prophecies when he first meets the weird sisters, 'All hail Macbeth...Thane of Glamis...Thane of Cawdor...King hereafter!'(Act One Scene Three) ...read more.

(Act Three Scene One). In this scene, we as the audience start to see Macbeth as 'evil' as he starts to say and do things that link to the weird sisters. For example, he uses three murderers to kill Banquo and Fleance, 'Enter three murderers' (Act Three Scene Three). Macbeth does not tell Lady Macbeth that he is going to kill Banquo and his son, 'Be innocent of the knowledge, dearest chuck, till thou applaud the deed.' (Act Three Scene Three) This gives me the impression that Lady Macbeth is not really a main part in Macbeth's downfall, but Macbeth is actually responsible. This scene also shows that their relationship is growing apart as Macbeth used to tell Lady Macbeth everything. Since Duncan's death, Macbeth and Lady Macbeth have grown apart and both regret killing the King. They both have the same emotion but they cannot come to share it with each other. An example of this is in Act Three Scene Two, Lady Macbeth says ''Tis safer to be that which we destroy, then by destruction dwell in doubtful joy.' Later on in this scene, Macbeth says 'Better be with the dead...' Both characters have the same thoughts but just cannot share them with anyone. In Act Four Scene One, Macbeth goes to see the witches thinking that he has control over them. ...read more.

During the play, the witches were referred to as weird sisters rather than witches. I think this was because the word 'wyrd' means fate in old English. Lady Macbeth was really persuasive especially when she wanted something. Her persuasion worked well on Macbeth as he was a 'coward'. I think Lady Macbeth could be seen as a contributor to Macbeth's downfall because she persuaded him to murder Duncan. However, she did not know that Macbeth was going to murder Banquo, Fleance and Macduff's family; he made that decision himself. I believe that Macbeth was the main contributor to his downfall because by the end of the play, he was making decisions for himself even if they did not actually resolve anything. He decided to listen to everything that the witches said when he did not have to, like Banquo. Even though Lady Macbeth and the witches put ideas into Macbeth's mind, he was the one who took everything further than what it should have gone which led to his downfall. In my opinion, Macbeth was just a coward because he could not say 'no' to anyone when he had the chance to. He could have not listened to the weird sisters then he would not have had his big downfall. ?? ?? ?? ?? Georgina Saunders FINAL Page 1 of 3 ...read more.

The candidate has attempted to answer the question, however the essay feels a bit jumbled. It would flow better if s/he focused on all the reasons why and why not the witches could be held responsible for MacbethÃ¢â‚¬â„¢s downfall and ...

The candidate has attempted to answer the question, however the essay feels a bit jumbled. It would flow better if s/he focused on all the reasons why and why not the witches could be held responsible for MacbethÃ¢â‚¬â„¢s downfall and then all the reason why and why not Lady Macbeth is responsible and so forth. When discussing the witches you could use more references to how the scene is set to make the audience think of evil doings. This is done well in the third paragraph but could be elaborated.

This essay question gives a great opportunity to do some independent research and talk about how witches were perceived in those times. The candidate has added an example into the second paragraph but this could be extended and more points could be added throughout the essay. For example the reason Shakespeare uses three witches is because the number three was considered to be magical, this hints that the witchÃ¢â‚¬â„¢s have magical powers. I feel that to some extent the candidate has missed the point of the question and would benefit from refocusing the essay to action of the witches.

The candidate does use several quotations but there are cases where these are used simply to retell the story, there is very little analysis and when given it is of a basic level. There is no mention of linguistic techniques, such as the use of metaphors and alliteration and how these add to play, at GCSE level this is an important aspect. The essay doesnÃ¢â‚¬â„¢t flow as well as it could and there times when the candidate jumps back and forth between points. The language used is about average for a GCSE candidate, therefore in the D grade bracket. The introduction isnÃ¢â‚¬â„¢t very clear, it doesnÃ¢â‚¬â„¢t quite answer the question and IÃ¢â‚¬â„¢m not sure how much thought was put into it. Again the conclusion has similar problems, and doesnÃ¢â‚¬â„¢t quite manage to relate to the question, the candidate needs to summarise why the witches are not responsible if they are of that opinion.