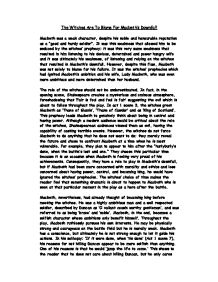 The Witches Are to Blame for Macbeth's downfall

The Witches Are To Blame For Macbeth's Downfall Macbeth was a weak character, despite his noble and honourable reputation as a "good and hardy soldier". It was this weakness that allowed him to be seduced by the witches' prophecy; it was this very same weakness that resulted in him listening to his devious, determined and power hungry wife and it was ultimately his weakness, of listening and relying on the witches that resulted in Macbeth's downfall. However, despite this flaw, Macbeth was not solely to blame for his failure. It was the witches' prophecies which had ignited Macbeth's ambition and his wife, Lady Macbeth, who was even more ambitious and more determined than her husband. The role of the witches should not be underestimated. In fact, in the opening scene, Shakespeare creates a mysterious and ominous atmosphere, foreshadowing that 'Fair is foul and foul is fair' suggesting the evil which is about to follow throughout the play. In act 1 scene 3, the witches greet Macbeth as 'Thane of Glamis', 'Thane of Cawdor' and as 'King of Scotland'. This prophecy leads Macbeth to genuinely think about being in control and having power. Although a modern audience would be critical about the role of the witches, Shakespearean audiences viewed them as evil, having the capability of casting terrible events. ...read more.

Also, if he kills Duncan he could also be vulnerable to 'assassination.' The audience notes that, despite being preoccupied with his own ambitions, he has taken note of the witches' prophecy regarding Banquo. He mentions it twice, 'your children shall be kings'; 'Do you not hope your children shall be kings'. The audience questions whether this is a sign of his jealousy that Banquo will be, according to the witches, father of many kings. It is Macbeth's own ambition to become king and to sit on the throne of Scotland. One way he proves this is by killing his best friend Banquo, because he wants to keep the throne to himself. When he tells the murderers to kill Banquo, he shows that he feels sorry for Banquo by saying "Banquo, thy soul's flight, if it find heaven, must find it out to-night.' This makes the reader feel that Macbeth has lost trust in his own best friend and that Macbeth is no longer loyal or trustworthy just because of the witches' prophecy of Macbeth being king. Despite his attempts to hide it, Macbeth has a conscience. It does not speak through voice of reason or logic. Rather it surfaces in the form of vivid images; a b****y dagger, a voice crying 'sleep no more', hallucinations and other vile images. ...read more.

Macbeth is to easily persuade by his wife. If he truly was morally tough he would have acknowledged that killing your guest, especially the king, who in the medieval times was thought to be appointed by god, was wrong. But his weakness prevails once again and he goes along with Lady Macbeth. In conclusion, Macbeth did have three forces that motivated him to commit his evil acts and bring a whole lot of chaos to Scotland. The three forces were his own ambition of becoming king and holding that title, Lady Macbeth's constant pushing and well thought of plans and ultimately the witches prophecies of him being king and planting the seed. All three factors added to his motivation of committing these many evil crimes. Although in the end Macbeth dies, his carnage and chaos still leaves a mess behind. All in all, Macbeth should be blamed for these acts because of his weak conscience and character as well as his ambition of doing whatever it takes, even if this means murder, in order to become king. Finally, if the witches had not made such prophecy of Macbeth becoming king then none of the above events would have taken place. Therefore, I believe that it is the witches who are to blame for Macbeth's downfall as well as Macbeth himself. ...read more.