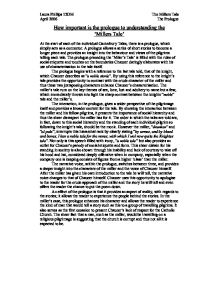 How important is the prologue to understanding the 'Millers Tale'

How important is the prologue to understanding the 'Millers Tale' At the start of each of the individual Canterbury Tales, there is a prologue, which simply acts as a connector. A prologue allows a series of short stories to become a longer piece and provides an insight into the behaviour and views of the pilgrims telling each tale. The prologue preceding the 'Miler's Tale' is filled with the rules of social etiquette and touches on the boundaries Chaucer daringly elaborates with his use of characterisation in the tale itself. The prologue begins with a reference to the last tale told, that of the knight, which Chaucer describes as "a noble storie". By using this reference to the knight's tale provides the opportunity to contrast with the crude character of the miller and thus these two juxtaposing characters enhance Chaucer's characterisation. ...read more.

The order in which the tales are told are, in fact, down to this social hierarchy and the standing of each individual pilgrim so following the knight's tale, should be the monk. However the miller, "drunken" and "al pale", interrupts this hierarchal rank by clearly stating "by armes, and by blood and bones, I kan a noble tale for the nones, with which I wol now quite the Knightes tale". Not only is this speech filled with irony, "a noble tale" but also provides an outlet for Chaucer's parody of social etiquette and form. This sheer distain for his standing in society is also shown through his inability and lack of courtesy to take off his hood and hat, considered deeply offensive when in company, especially when the company one is keeping consists of figures from a higher 'class' than the miller. ...read more.

An effect of the prologue is that it provides an aspect of reality, with regards to the stories; it allows the reader to experience the people behind the stories. In the miller's case, this prologue enhances his character and allows the reader to experience the kind of man that would tell a story such as this to a group of travelling pilgrims. It also serves as the first occasion to present Chaucer's lack of respect for the Catholic Church. The sheer fact that a man, such as the miller, would be travelling on a religious pilgrimage is suggesting that the church is corrupt and thus not all it is expected to be. ?? ?? ?? ?? Laura Phillips 12DM The Millers Tale April 2006 The Prologue ...read more.