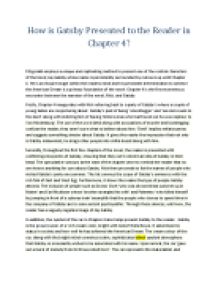 How is Gatsby presented to the reader in Chapter 4 in the novel &quot;The Great Gatsby&quot; by F. Scott Fitzgerald

﻿How is Gatsby Presented to the Reader in Chapter 4? Fitzgerald employs a unique and captivating method to present one of the central characters of the book; Jay Gatsby whose name is persistently surrounded by rumours up until Chapter 4. He is an elusive image within the readers mind and his persistent determination to achieve the American Dream is a primary foundation of the novel. Chapter 4 is the first momentous encounter between the narrator of the novel, Nick, and Gatsby. Firstly, Chapter 4 inaugurates with Nick referring back to a party of Gatsby?s where a couple of young ladies are conjecturing about Gatsby?s past of being ?a bootlegger? and ?second cousin to the devil? along with indicting him of having ?killed a man who had found out he was nephew to Von Hindenburg?. The use of the word devil along with accusations of murder and bootlegging confuse the reader; they aren?t sure what to believe about him. ?Devil? implies nefariousness and suggests something sinister about Gatsby. It gives the reader the impression that not only is Gatsby malevolent; he drags other people into sinful deeds along with him. Secondly, throughout the first few chapters of the novel, the reader is presented with conflicting viewpoints of Gatsby, ensuring that they can?t cement an idea of Gatsby in their head. ...read more.

However he isn?t always able to hide his true side. Along with this, through chapter 3 and 4, there is a significant change in Gatsby?s method of diction. When Nick first encounters Gatsby in chapter 3, he describes his manner of speaking as having an ?elaborate formality of speech [that] just missed being absurd?. The fact that he addresses everyone as ?sport? suggests that he feels the need to constantly appear sociable to the world; he ensures that a conversation with him is remembered. He feels the need to be accepted into the society as he wasn?t born into wealth and uses familiar terms like ?sport? to form a more personal connection with his audience. This exemplifies Gatsby as a punctilious, formal man in the readers mind. However, as the novel progresses in Chapter 4, Nick describes a distinct alteration in the way Gatsby speaks and presents himself. Nick mentions that he had found to his disappointment that Gatsby ?had little to say?. He also states: ?So my first impression, that he [Gatsby] was a person of some undefined consequence, had gradually faded and he had become simply the proprietor of an elaborate road-house next door?. This statement is one of the first contradictions of any previous image of Gatsby that is etched in the reader?s mind; thus leaving their image of Gatsby in a befuddled state. ...read more.

She is his ?green light at the end of the dock?. The connotation of the colour green represents the hope Gatsby has for his future; the fact that the green light is at the end of the dock also portrays how although Gatsby can see the hopes and dreams he is striving for in plain sight, he may not necessarily be able to reach them. Gatsby?s aim to attract the love of his life is noble and pure, but the crooked methods he employs to achieve this are repulsive to Nick and the reader. This causes an internal dilemma; at this point in the novel, the reader?s emotions towards Gatsby constantly fluctuate between approbation and revulsion. They are forced to question his essence and character. In conclusion, chapter 4 serves to show a wide variety of perspective of Gatsby to the reader. It shows an insight into Gatsby?s past and his true self. His request from Nick, to invite Daisy over so that they can meet, is so innocent and pure that the reader has no choice but to sympathise with him. Everything Gatsby has done in his life has been for Daisy; he has completely reinvented himself from a noble soldier to a millionaire businessman to win her love. Essentially, Gatsby has given up his ethics and principles for the love of his life. Ali Malik 10 Oasis ...read more.