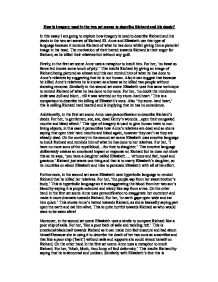 How is imagery used in the two set scenes to describe Richard and his deeds?

How is imagery used in the two set scenes to describe Richard and his deeds? In this essay I am going to explore how imagery is used to describe Richard and his deeds in the two set scenes of Richard III. Anne and Elizabeth use this type of language because it reminds Richard of what he has done whilst giving him a pictorial image in his head. The motivation of their hatred towards Richard is their anger for Richard, as he killed their relatives but without any guilt. Firstly, in the first set scene Anne uses a metaphor to insult him. For her, 'no beast so fierce but knows some touch of pity.' This insults Richard by giving an image of Richard being pictured as a beast and this can remind him of what he has done to Anne's relatives by suggesting that he is not human. Also it can suggest that because he killed Anne's relatives he is known as a beast as he killed two people without showing remorse. Similarly in the second set scene Elizabeth uses this same technique to remind Richard of what he has done to her sons. ...read more.

virtuous and fair, royal and gracious.' Richard just wants one thing and that is to marry Elizabeth's daughter, so he mumbles on about Elizabeth and tries to persuade Elizabeth with all of his effort. Furthermore, in the second set scene Elizabeth uses hyperbolic language to remind Richard that he killed her relatives. For her, 'the purple sap from her sweet brother's body.' This is hyperbolic language as it is exaggerating the blood from her two son's blood by saying it is purple coloured and sticky like sap from a tree. On the other hand in the first set scene Anne uses personification to exaggerate her comment and make it more dramatic towards Richard. For her, 'or earth gape open wide and eat him quick.' This shows Anne's hatred towards Richard, as she is basically saying part open the earth and eat him alive. This is quite hurtful towards Richard as who would want to be eaten alive! Moreover, in the second set scene Elizabeth uses a simile to compare Richard like a poor ship of sails. For her, 'like a poor bark of sails and tackling reft.' ...read more.

This start of a line is at the beginning of a monologue. Once Anne finishes her lines Richard says, 'lady you know no rules of charity...which renders good for bad, blessings for curses.' This basically means that Anne knows no rules of the Christian belief, which turns into good for bad, blessings for curses. Richard is using antithesis to make Anne feel less certain or confused about him, and he doesn't lose his temper over her monologue because he has very good control over his anger and when he wants something so badly he will do anything to achieve it. Similarly in the second set scene Elizabeth uses a metaphor to describe her sons and to remind Richard of his deeds. For her, 'to revel in the entrails of my lambs.' She is basically saying that her sons were beautiful and innocent as 'lambs.' This can remind Richard of what he has done as she is describing her sons and what they were like which usually makes people feel guilty. Then Richard says, ......'as I intend more good to you and yours...than ever you and yours were harmed.' He doesn't lose his temper and this is one of the ways he is able to deceive the two women. ...read more.