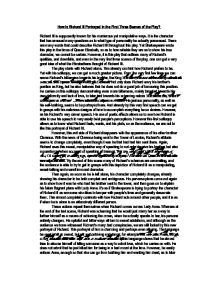 How is Richard III Portrayed in the First Three Scenes of the Play?

How is Richard III Portrayed in the First Three Scenes of the Play? Richard III is supposedly known for his murderous yet manipulative ways. It is the character that has aroused many questions as to what type of personality he actually possessed. There are many words that could describe Richard III throughout this play. Yet Shakespeare wrote this play in the times of Queen Elizabeth, so as to how reliable they are as to show his true character, we cannot be certain. However, it is this play that outlines many of Richard's qualities, and downfalls, and even in the very first three scenes of the play, one can get a very good idea of what the Elizabethans thought of Richard III. The play starts with Richard alone. This already can hint how Richard prefers to be. Yet with his soliloquy, we can get a much greater picture. From the very first few lines we can sense Richard's bitterness towards his brother, the King 'And now, instead of mounting barbed steeds /...He capers nimbly in a lady's chamber' Not only does Richard envy his brother's position as King, but he also believes that he does not do a good job of honouring this position. He carries on this soliloquy demonstrating even more bitterness, mainly targeted towards his own deformity and lack of love, to later hint towards his scheming nature 'And therefore, since I cannot prove a ...read more.

These actions repeat themselves when Richard comes across Lady Anne. Whereas at the end of the last scene, Richard was scheming that he would just marry her as a way to further himself as a means of achieving the crown, when he actually speaks to her, his persona entirely changes. His spiteful and bitter ways all turn to sweet adulations, and although as the audience we have witnessed Richard's many bad conspiracies, we are still fooled by this new portrayal of Richard. This portrayal of him is charming and perhaps even alluring. The language he uses is all so sweet, but yet so contriving and canny, for example 'He that bereft thee, lady, of thy husband / Did it to help thee to a better husband.' This language shows that he almost tries to excuse himself of killing someone as a way to admit love, which he carries on with. He does not admit that he just killed him for being in a bad mood at the time. However, he easily entices Anne, enough so that she can go from loathing him and wanting him dead, as to later on wearing Richard's ring. His character is just that manipulative that it is so effective for him to get whatever he wants. This then portrays him to seem as if he suffers from some sort of schizophrenia, where he can't help but be an ever-changing character. ...read more.

He twists the others actions to make them feel bad for troubling the ill King with petty arguments. Yet, when Margaret appears all this hatred, from everyone in this scene, is directed to her, which again is used as an advantage for Richard. However, he is still portrayed as the heinous villain as Margaret expresses her true enmity for him, 'Why strew'st thou sugar on that bottled spider / Whose deadly web ensnareth thee about?' It is only Margaret who can see Richard for the devious person he is, yet the irony in that she is the only person that no one seems to listen to just adds to the portrayal Richard has of being so cunning. The overall character of Richard is very hard to understand, as there are many different sides to him, an advantage to him as it enables him to get almost exactly what he wants, with generally no one being any wiser and figuring out this scheming side to him. It is Richard's determined mind, and lack of guilt that make him a hated character. However, what is even more chilling is the fact that even this most contriving of characters can be liked by the audience due to his powerful, and intelligent speeches. It is still this dominant character that confuses the minds of many people by his many personalities, and it is this character, and his many different portrayals that grips many readers to the play. ...read more.