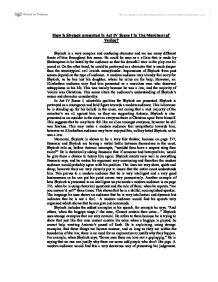 How is Shylock presented in Act IV Scene I in The Merchant of Venice?

How is Shylock presented in Act IV Scene I in The Merchant of Venice? Shylock is a very complex and confusing character and we see many different facets of him throughout this scene. He could be seen as a villain that is made by Shakespeare to be hated by the audience so that his downfall later in the play can be jeered at. On the other hand, he could be portrayed as a character that is much deeper than the stereotypical evil Jewish moneylender. Impressions of Shylock from past scenes depend on the type of audience. A modern audience may already feel sorry for Shylock, as he has lost his daughter, whom he relies on for help. However, an Elizabethan audience may find him presented as a merciless man who deserved unhappiness in his life. This was mainly because he was a Jew, and the majority of Venice was Christians. This scene alters the audience's understanding of Shylock's nature and character considerably. In Act IV Scene I, admirable qualities for Shylock are presented. Shylock is portrayed as a courageous and bold figure towards a modern audience. This is because he is standing up for his beliefs in the court, not caring that a vast majority of the onlooker's are all against him, as they are supporting Antonio. Shylock is also presented as an outsider in the court as everyone there is Christian apart from himself. ...read more.

We are compassionate towards him as we find this quite malicious. Nevertheless, an Elizabethan audience would have found this amusing and thought that Shylock had deserved it. A modern audience may have empathy towards Shylock, as he doesn't know that the doctor is Portia, so she is siding with Antonio and she wants Shylock to fail in receiving his bond. An Elizabethan audience may find this entertaining and amusing, as they want Antonio to survive. From past scenes, it is evident that Shylock has been spat on by Antonio and has been called names such as "dog". Below is an extract from one of Shylock's talks with Antonio, before lending money to them. "You call me misbeliever, cut-throat dog, And spit upon my Jewish gabardine..." This is showing a modern audience how Jews were treated in those times and how much Shylock had to suffer. Christians called Jew's "cut-throat dogs" as an insult they hurled at them. When Shylock says that he was called a "misbeliever", we feel hatred towards Antonio, and empathize with Shylock. An Elizabethan audience would have felt that Shylock deserved these names, because he was a Jew. However, as a modern audience we believe that no one should be named in this way. As well as that, Shylock may seem very childish to an Elizabethan audience for the reason that he mentions the word "bond" very often when he speaks and does not answer Portia's questions. ...read more.

Moreover, Jessica does not seem to have a very big space in Shylock's heart. This is because he says, "Would any of the stock of Barrabas Had been her husband rather than a Christian." This tells us how much he hates Christians. He may hate them because of the way they treat Jews, or simply because Christian's hate Jew's. A modern audience would now see that it is not only Christians who are at fault of racism, but also Jew's. Also, Shylock explains how he would have rather desired Jessica's husband to be from "any of the stock of Barrabas" rather than a Christian. When Shylock says "any", he seems as though he doesn't care very much who she marries, as long as he is a Jew. This not only shows his hatred towards Christians, but also how much he loves his daughter. Elizabethan audience would find this statement horrifying, as the majority of them would be Christian. Some may feel hatred towards Shylock in this part of the scene because he was going to take a pound of flesh from Antonio. From my point of view, I think that it is more accurate to feel sympathetic towards him because I don't think that Shylock would have taken such drastic actions against Antonio if there was not such an immense contrast between Jews and Christians. I think that Shylock is just punishing Antonio for being so cruel, and if Antonio had given the slightest bit of respect to Shylock, then I think his attitude would not have been so horrifying. ?? ?? ?? ?? ...read more.