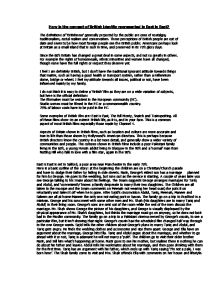 How is the concept of British identity represented in East is East?

How is the concept of British identity represented in East is East? The definitions of 'Britishness' generally projected by the public are ones of nostalgia, traditionalism, social realism and conservatism. These perceptions of British people are out of date and seem to be how most foreign people see the British public. Americans perhaps look at Britain as a small island that is suck in time, and preserved in its 70's glory days. Since the 60's Britain has changed a great deal in some aspects, and not so greatly in others. For example the rights of homosexuals, ethnic minorities and women have all changed, though none have the full rights or respect they deserve yet. I feel I am definitely British, but I don't have the traditional ignorant attitude towards things that matter, such as having a good health or transport system, rather than a millennium dome, bridge or wheel. I feel my attitude towards all issues, political or not, have been influenced mainly by my family. I do not think it is easy to define a 'British' film as they are on a wide variation of subjects, but here is the official definition: The filmmaker must be resident in the European community (EC). ...read more.

The family go on a trip to Bradford in a minivan. George and his sons meet with some other men and Mr. Shah (His daughters are to marry Tariq and Abdul) in their living room. George's sons are sent out of the room while the rest of the men discuss the marriage. Mr. Shah shows George the picture of his daughters, and George is visually displeased by the physical appearance of Mr. Shah's daughters, but thinks the marriage must go on anyway, so he does not look bad in the Muslim community. The family go on a trip to a Pakistani cinema owned by George's cousin, to see a particular film, but it isn't showing that night. George's cousin has the scheduled film changed half way through to the one George wants. Sajid tells the other children about George's plans to marry Tariq and Abdul, and Tariq gets angry. He finds the wedding clothes and accessories and rips them apart. George and Ella have an argument about the marriage, George hits Ella. Tariq and Abdul argue about the marriage, and whether to go ahead with it or not, Tariq is adamant he will not marry a 'paki'. The children go to visit their older brother Nazir, and tell him what's happening at home. ...read more.

But behind closed doors George is a bully, he pressures his family to do things and if they refuse he disowns them (Nazir), hits them (Ella) or threatens them (Abdul). Ella - Ella is a working class white woman who got married to George when she was young. Presumably she had one child and kept being talked in to it, so she has not had a lot of experience of life outside motherhood. Ella wears traditional Pakistani jewellery, but won't wear the clothes or veils as she feels they are restricting and degrading. She is more laid back and lenient with the children than George e.g. She gave Saleem money to buy art materials when George thought he was studying Engineering, and allowing the children to eat pork and bacon behind George's back. But on the other hand, she respects George's beliefs enough to let him circumcise their children. Nazir - Nazir is Ella and George's eldest son. He was the first of their children to have a marriage planned for him, and when he ran away from it he brought shame on the family, because of this George disowns Nazir and claims he isn't his son. Nazir despises Islam and it's traditions, he also despises his father for forcing them on him. Robin Jukes 11s ...read more.