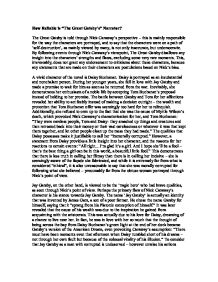 How Reliable is "The Great Gatsby's" Narrator? The Great Gatsby is told through Nick Caraway's perspective - this is mainly responsible for the way the characters are portrayed, and to say that the characters were on a path of 'self-destruction', as mainly viewed by many, is not only inaccurate, but undemocratic. By following events through Nick Caraway's viewpoint, The Great Gatsby disallows any insight into the characters' strengths and flaws, excluding some very rare moments. This, irrevocably, does not grant any endorsement to criticisms about these characters, because any statements that are made on their characters are postulations based on Nick's bias. A vivid character of the novel is Daisy Buchanan. Daisy is portrayed as an insubstantial and nonchalant person. During her younger years, she fell in love with Jay Gatsby and made a promise to wait for him as soon as he returned from the war. ...read more.

I'm glad it's a girl. And I hope she'll be a fool - that's the best thing a girl can be in this world, a beautiful little fool." This demonstrates that there is less truth in calling her flimsy than there is in calling her incisive - she is seemingly aware of the fa�ade she fabricated, and while it is extremely far from what is considered "ethical", it is also unreasonable to say that she was morally corrupted for following what she believed - presumably far from the obtuse woman portrayed through Nick's point of view. Jay Gatsby, on the other hand, is viewed to be the 'tragic hero' who had brave qualities, as seen through Nick's point of view. Perhaps the primary flaw of Nick Caraway's character is his stance towards Jay Gatsby. The name 'Jay Gatsby' is actually an identity that was invented by James Gatz, a son of a poor farmer. ...read more.

This opens up a new level of questions whether Jay Gatsby is really the "hero" Caraway had portrayed him to be, especially when Gatsby hide his criminal activities with the fa�ade of a perpetually courteous host. An example of Caraway's preconception on the characters was when he stated," Everyone suspects himself of at least one of the cardinal virtues, and this is mine: I am one of the few honest people I have ever known" only to continue aligning himself with Jay Gatsby despite his fabrications. Nick Caraway's reliability on portraying equal views on the characters is especially refuted by that statement alone. Conclusively, the characters in the novel were presented to face a path of moral corruption, as shown through Nick Caraway's views - but possibly, if Fitzgerald were to cast one of his other characters to narrate the novel as he did Caraway, then their portrays might differ from the ones that were presented in the novel. ...read more.