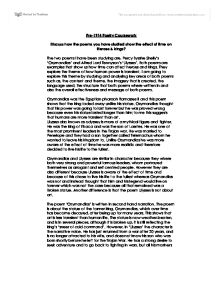 How The Poems &quot;Ullyses&quot; And &quot;Oymandias&quot; Explore The Effect Of Time On Heoes And Kings

Pre-1914 Poetry Coursework Discuss how the poems you have studied show the effect of time on Heroes & kings? The two poems I have been studying are, Percy Bysshe Shelly's 'Ozymandias' and Alfred Lord Tennyson's 'Ulysses'. Both poems are examples that show us how time can affect heroes and kings. They explore the theme of how human power is transient. I am going to explore this theme by studying and analysing key areas of both poems such as, the content and theme, the imagery that is created, the language used, the structure that both poems where written in and also the overall effectiveness and message of both poems. Ozymandias was the Egyptian pharaoh Ramasses II and this poem shows that the king faded away unlike his statue. Ozymandias thought that his power was going to last forever but he was proved wrong because even his statue lasted longer than him; to me this suggests that humans are more transient than art. Ulysses also known as odyssey is more of a mythical figure and fighter. He was the king of Ithaca and was the son of Laertes. He was one of the most prominent leaders In the Trojan war. He was married to Penelope and they had a son together called Telemachus whom he wanted to leave his kingdom to. Unlike Ozymandias he was more aware of the effect of time he was more realistic and therefore decided to live his life to the fullest. ...read more.

In the quote "wrinkled lip and sneer of cold command" the use of the words "wrinkled lip" and "sneer" shows that the artist saw the real Ozymandias it also shows contempt and shows us that Ozymandias looks down at people. The use of hard alliteration in "cold command" shows the bad ruling and cruelty that Ozymandias has. On the other hand Ozymandias is not just a cruel ruler. "The hand that mocked them and the heart that fed" this quote shows the two sides to his personality. Shelley also uses the pun "mocked" here. Ulysses is also portrayed as a arrogant character because of the lack of respect he has for his wife. "match'd with a aged wife" the way he uses "match'd" makes it seem that he has been forced to be with her/ he also calls her "aged" this is disrespectful because this word is usually related to old and ugly things. The use of the word is also ironic and hypocritical because he is also old but is still cursing her for being aged. I think he does this because he doesn't want her to affect his image; this is unfair on his wife's behalf because she has been a true wife staying faithful to him but despite that he just sees her as an ugly old woman. ...read more.

I think the message of both poems is that of the transience of power on heroes and kings. However In 'Ozymandias', the impact of the sonnet's message comes from the double irony. He says "look on my works, ye mighty, and despair!" Yet in the end, nothing remains of Ozymandias' works but the fragments of his statue. So, 'ye mighty' should despair because they can never hope to equal his achievements and without doubt they will share his fate of death. The second irony is within the 'survival' of the character in the fragments being due not to his own powers but to those of the artist. The irony of the inscription is that it could have been written by Time herself, a warning to all those in positions of power that power on earth is passing by and that only God is immortal. Similarly, in 'Ulysses', the main character exuded pride and was thought to be a very strong man. Victorians tended to read this poem pretty straightforwardly, as a statement of faith in the necessity of striving ever onward. Even a man as clever as Ulysses could not outwit the Fates, and like everyone else he too grew old. Although many readers have accepted the last lines of the poem as inspirational, it is not clear that Tennyson intended them to be so. Ulysses' final call to action is suicidal and proud. He intends to die in battle instead of in peace with his family. ...read more.