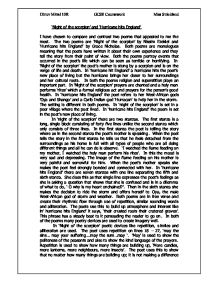 I have chosen to compare and contrast two poems that appealed to me the most. The two poems are 'Night of the scorpion' by Nissim Ezekiel and 'Hurricane hits England' by Grace Nicholas.

The poet uses onomatopoeia to emphasise the ways of his culture, 'they clicked her tongues'. The peasants show their culture by clicking their tongues to capture the scorpion. 'They buzzed the name of god' this shows that the peasants repeat the name of god so many times that it sounds like a buzz. I think the poet doesn't respect the peasants very much as the word 'buzz' is not a very respectable word. If the poet respected them or liked them he would rephrase the sentence by saying 'the peasants repeated the name of god as fast as...'. In 'hurricane hits England' the poetic devices that are used are repetition, alliteration, metaphors and personification, she also asks rhetorical questions. The poet uses a rhetorical question to ask the hurricane why it travels to new places and brings havoc and destruction with it, 'What is meaning of old tongues reaping havoc in new places?'. 'Old tongues' are the voices of thunder and storm. This question is forcing her to question her mind set about her cultural past and present. The poet uses an image of a howling ship to create horror and scary outlook to the hurricane, ' the howling ship of the wind'. The image is very powerful and frightening. This metaphor makes us imagine the hurricane as a haunted, frightening and a scary ship. ...read more.

The poet feels strongly about the subject as it allowed her to understand the issue of everywhere being the same which would help her in future if she moves somewhere again. In 'night of the scorpion' the mood of the poem is tense yet happy as many people are trying to look after the poet's mother. It's nice to see the care of all the people towards her. The poet tries to make us feel sympathetic towards him as he feels detached from his surroundings. The poet feels strongly about the subject as his mother is on the verge of life and death. Both the poems have many poetic devices like onomatopoeia, alliteration, similes, metaphors and repetition. These are all used to emphasise particular points and to create good imagery of what's happening. Both poems have a sentimental tone and provide an excellent insight to the poets' culture. I personally enjoyed 'hurricane hits England' more then 'night of the scorpion' as it is a much more powerful poem and allows you to imagine how the poet would have felt when the hurricane hit her new place of living. In 'night of the scorpion' there is physical pain where as in 'hurricane hits England' there is emotional pain. 'night of the scorpion' made me feel view a place by the king and caring minds of the people and the atmosphere not by the quality of housing or in terms of economy. ?? ?? ?? ?? Dhruv Mittal 10R GCSE Coursework Miss Strickland ...read more.