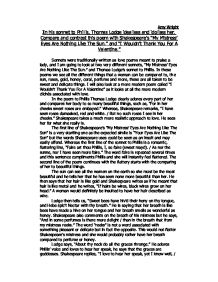 In his sonnet to Phillis, Thomas Lodge idealises and idolises her. Compare and contrast this poem with Shakespeare's &quot;My Mistress' Eyes Are Nothing Like The Sun.&quot; and &quot;I Wouldn't Thank You For A Valentine.&quot;

Amy Wright In his sonnet to Phillis, Thomas Lodge idealises and idolises her. Compare and contrast this poem with Shakespeare's "My Mistress' Eyes Are Nothing Like The Sun." and "I Wouldn't Thank You For A Valentine." Sonnets were traditionally written as love poems meant to praise a lady, and I am going to look at two very different sonnets, "My Mistress' Eyes Are Nothing Like The Sun." and Thomas Lodge's sonnet to Phillis. In these poems we see all the different things that a woman can be compared to, the sun, roses, gold, honey, coral, perfume and more, these are all taken to be sweet and delicate things. I will also look at a more modern poem called "I Wouldn't Thank You For A Valentine" as it looks at all the more modern clich�s associated with love. In the poem to Phillis Thomas Lodge clearly adores every part of her and compares her body to so many beautiful things, such as, "For in her cheeks sweet roses are embayed." Whereas, Shakespeare remarks, "I have seen roses damasked, red and white. / But no such roses I see in her cheeks." Shakespeare takes a much more realistic approach to love. He sees her for what she really is. The first line of Shakespeare's "My Mistress' Eyes Are Nothing Like The Sun" is a very startling one as the expected simile is "Your Eyes Are Like The Sun" but the words Shakespeare uses could be seen as an insult and may easily offend. ...read more.

Lodge then says, "In such a breast what heart would not be thrall?" complimenting her once again, but Shakespeare merely says, "If snow be white, why then, her breasts are dun" almost insulting the colour of her skin, describing it as beige and dull. The next few lines are, "From such sweet armes who would not wish embraces? At thy faire handes who wonders not at all, / Wonder itselfe through ignorance embraces?" These are basically all complimenting her and describing her as a goddess. Shakespeare replies, "I grant I never saw a goddess go, / My mistress, when she walks, treads on the ground" and this portrays her just like any other human and in a very unfeminine way. The word "treads" makes it seem as if she stomps along the ground instead of floating like a goddess would. In the tradition of courtly love a man is supposed to worship his mistress as a goddess. The two concluding lines of each sonnet are very complimentary. Lodge says, "Yet naithelesse tho wonderous giftes you call these, / My faith is farre more wonderfull then all these." Which is basically saying that no matter what she looks like his love for her is far more wonderful than all of those things, so he is not just superficially in love with her physical beauty. Shakespeare justifies his whole poem in the last two lines by saying, " And yet, by heaven, I think my love as rare / As any she belied with false compare." ...read more.

She wants more meaningful gifts and things that really matter, "If you hired a plane and blazed our love in a banner across the skies;/ if you bought me something flimsy in a flatteringly wrong size;/ if you sent me a postcard with three Xs and told me how you felt" these are all much more romantic things and she ends by saying, "I wouldn't thank you, I'd melt." So throughout this poem she leads us to believe that she hates Valentines Day and would never accept any form of Valentine gift. We get the opinion that she thinks gifts are all clich�s and she doesn't want any, not in any shape or form. Until we see at the end that she would love big, romantic, meaningful gifts and she would just melt if she received any. The clich�s in this poem aren't similar to the ones I looked at in the other two poems but I do feel that this might be the opinion of the women Lodge and Shakespeare were writing to, and they would much rather have more meaningful words written to them, or more romantic gifts. Shakespeare and Lochhead detest clich�s and are more romantic writers who appreciate true, meaningful love. Whereas Lodge uses a lot of clich�s and he does clearly adore Phillis but believes that she can be won over by meaningless and unrealistic words. Shakespeare is less likely to flatter, but more likely to win the love of his mistress. ...read more.