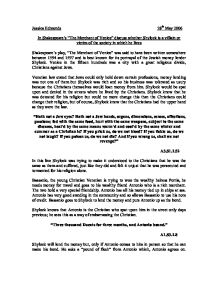 In Shakespeare's &quot;The Merchant of Venice&quot; discuss whether Shylock is a villain or victim of the society in which he lives

Jessica Edmonds 28th May 2006 In Shakespeare's "The Merchant of Venice" discuss whether Shylock is a villain or victim of the society in which he lives Shakespeare's play, "The Merchant of Venice" was said to have been written somewhere between 1594 and 1597 and is best known for its portrayal of the Jewish money lender Shylock. Venice in the fifteen hundreds was a city with a great religious divide, Christians against Jews. Venetian law stated that Jews could only hold down certain professions, money lending was not one of them but Shylock was rich and so his business was tolerated as usury because the Christians themselves would loan money from him. Shylock would be spat upon and denied in the streets where he lived by the Christians. Shylock knew that he was detested for his religion but could no more change this than the Christians could change their religion, but of course, Shylock knew that the Christians had the upper hand as they were the law. "Hath not a Jew eyes? Hath not a Jew hands, organs, dimensions, senses, affections, passions; fed with the same food, hurt with the same weapons, subject to the same diseases, heal'd by the same means warm'd and cool'd by the same winter and summer as a Christian is? If you prick us, do we not bleed? ...read more.

Shylocks daughter Jessica even seems to be plotting against him. She sees her father as a mean man and so plots to run away with all his money and be with a Christian and even denounce her religion and become a Christian herself. Shylock is aware of this and, of course, blames the Christians for this. "Farewell, good Lancelot. Alack, what heinous sin is it in me to be ashamed to be my fathers child! But though I am a daughter to his blood, I am not to his manners. O Lorenzo, If thou keep promise, I shall end this strife, Become a Christian and thy loving wife". A2.S3.L14 Antonios ships have failed and when Shylock hears of the news he is pleased and wants to call in his bond and, will take Antonio in front of the high Duke to claim his "Pound of Flesh". "I'll have my bond; speak not against my bond; I have sworn an oath that I will have my bond. Thou call'dst me dog before thou hadst cause, but since I am a dog, beware my fangs. The Duke shall grant me justice. I do wonder, thou naughty jailor, thou art so fond to come abroad with him at his request" A3.S3.L4 Even though Antonio tries to reason with Shylock, he knows that the law must be upheld. ...read more.

Antonio detested Shylock for his religion but still had the arrogance to use him when he saw the need. Shylock was most certainly a villain by asking Antonio to pay such a high bond. Shylock was seeking revenge when he asked for his bond as he knew it would take Antonio's life, was Shylock justified in asking for such a thing? No because had it been anyone else borrowing money, the bond, would have been interest on the loan, not the persons life. Shylock was right to take Antonio to court to fulfil the bond but, could have redeemed himself in the eyes of the court if he had taken the money offered, which was much more than he had originally leant, after all he was just a money lender, he would have made a good deal on it as the Christians saw it. Shylock felt he could not stand down on his bond because of his religion and his hatred of the Christians. He felt that if he took the money it would be seen by the Christians that they could continue to operate outside the law and Jews rights would become less than they already were, so, maybe it could be seen that Shylock was a victim of his religious birth circumstances but, also that he was a vengeful man because of his actions and, of the way that the Christians tormented him for his religion. ...read more.