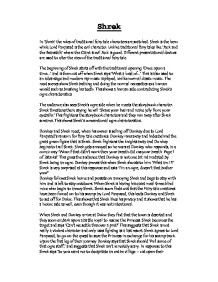 In 'Shrek' the roles of traditional fairy tale characters are switched.

Shrek In 'Shrek' the roles of traditional fairy tale characters are switched. Shrek is the hero while Lord Farquaad is the evil character. Unlike traditional fairy tales like 'Jack and the Beanstalk' where the Giant is evil Jack is good. Different presentational devices are used to alter the view of the traditional fairy tale. The beginning of Shrek starts off with the traditional opening 'Once upon a time...' and is then cut off when Shrek says 'What a load of...' This is also used to an advantage and modern rap music is played, unlike normal classic music. The next scenes show Shrek bathing and doing the normal necessities as a human would such as brushing his teeth. This shows a human side contradicting Shrek's ogre characteristics. The audience also sees Shrek's ogre side when he meets the storybook character. Shrek threatens them saying he will 'Shave your liver and make jelly from your eyeballs.' This frightens the storybook characters and they run away after Shrek screams. This shows Shrek's conventional ogre characteristics. Donkey and Shrek meet, when his owner is selling off Donkey due to Lord Farquaad's ransom for fairy tale creatures. ...read more.

This shows that Shrek is not a conventional ogre who is violent and vicious. Shrek is seen by the other characters, as unconventional. This is apparent when Shrek meets Princess Fiona. Princess Fiona in shaken violently by Shrek and she is disappointed that she did not get her romantic moment. Princess Fiona is in shock when she hears that Shrek hasn't slayed the dragon in which Shrek says 'Its on my to-do list.' This shows that Shrek is not a conventional hero and that he has a human side. We find out hat the Prince is not the flawless and heroic character in this film, in fact he is sinister, evil and....short. Unlike a conventional Prince who falls in love with the Princess we see a parody of this when Lord Farquaad chooses Princess Fiona in an unconventional 'Blind Date' style. We see Lord Farquaad's evil side when he is torturing the ginger bread man taunting him with his own rhyme 'run, run, run as fast as you can you can't catch me I'm the ginger bread man.' In the end of the film, Lord Farquaad shows his true motive for marrying Princess Fiona when he sees her as an ogre he orders her to be locked up. ...read more.

The music and sound effects are used to a great advantage to contradict the conventional ogre character. At the start when Shrek is bathing and doing chores, modern rock music is played giving the impression of him as a human like character. Music is used to show Shrek's loneliness when he is eating alone. Threatening music is played when we are first introduced to Lord Farquaad. The music at Lord Farquaad's tournament gives the sense of Lord Farquaad's stature and importance. Donkey is an important character as he shows Shrek that not all judge him, this is shown when Donkey first meets Shrek. Donkey also portrays comedy throughout the film. Donkey also Shrek 'get the girl,' as he explains to Shrek what he and Fiona was saying. Donkey is Shrek's only true friend and companion and helps him throughout their journey. In the film 'Shrek' the producers have made a switch in the protagonist role and have made the basis of a traditional fairy tale, into a funny and heartwarming film. The producers used many presentational devices to help switch the roles in this film. The producers have used presentational devices, comedy and good old story telling to show that 'you can't judge a book by its cover.' 3 3 ...read more.