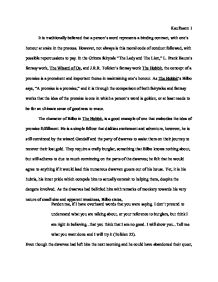 In the Grimm fairytale &quot;The Lady and The Lion,&quot; L. Frank Baum's fantasy work, The Wizard of Oz, and J.R.R. Tolkien's fantasy work The Hobbit, the concept of a promise is a prominent and important theme in maintaining one's honour.

It is traditionally believed that a person's word represents a binding contract, with one's honour at stake in the process. However, not always is this moral code of conduct followed, with possible repercussions to pay. In the Grimm fairytale "The Lady and The Lion," L. Frank Baum's fantasy work, The Wizard of Oz, and J.R.R. Tolkien's fantasy work The Hobbit, the concept of a promise is a prominent and important theme in maintaining one's honour. As The Hobbit's Bilbo says, "A promise is a promise," and it is through the comparison of both fairytales and fantasy works that the idea of the promise is one in which a person's word is golden, or at least needs to be for an ultimate sense of goodness to ensue. The character of Bilbo in The Hobbit, is a good example of one that embodies the idea of promise fulfillment. He is a simple fellow that dislikes excitement and adventure, however, he is still convinced by the wizard Gandalf and the party of dwarves to assist them on their journey to recover their lost gold. They require a crafty burglar, something that Bilbo knows nothing about, but still adheres to due to much convincing on the parts of the dwarves; he felt that he would agree to anything if it would lead this numerous dwarven guests out of his house. ...read more.

Wanting to save his own life and at least have the possibility of receiving a positive outcome, he agrees to the offer put forth by the lion. He anticipated that his youngest daughter would be the first to greet him on his arrival home, but all he could do was hope that his dear family would go unscathed from this bargain. It was the risky chance that made the offer attractive and so he took it. Unfortunately, his youngest daughter did greet him first and so he was obliged to give her up to the lion to live with. However, he attempted to avoid this obligation, but his daughter was quick to convince him that "a promise is a promise," and that he should keep to the promise that he made to maintain the goodness of his heart. Otherwise, the lion might even seek him out and do irreparable harm to him for not keeping his word. It is her desire to avoid conflict that sets her apart as the most considerate and just person within the story. The aspect of the promise is dependant upon two persons: the merchant and his youngest daughter. The promise cannot be fulfilled if not for the merchant's original oath as well as the follow up completion of the oath by his daughter, which is to go and live with the lion. ...read more.

It only serves him a dose of his own medicine that he takes a balloon over the desert, more than likely to never be heard from again. It is his uncertain, most likely dismal future that resulted from his immoral promises that he could not keep and the deceptive faults committed against his own subjects and guests. A better, brighter future may have resulted if only the Wizard had kept his promises, or at least made promises that he had a chance to fulfill. Even though a person may not be the most loyal or the most respected in all the land, it has nothing to do with the everlasting sense of honour that one can feel when one's word is kept. Through a thorough look at The Grimm fairytale "The Lady and The Lion," J.R.R. Tolkien's fantasy work, The Hobbit, and L. Frank Baum's fantasy work, The Wizard of Oz, it can be seen that honour and satisfaction are the result of keeping those promises that are made in confidence with those around them. A happy ending is always a desirable form of wish fulfillment, so in essence, must promises be kept to fulfill such an everlasting satisfaction? How else can true happiness occur, without a lasting sense of honour to maintain that happiness? In a sense, these are both required however ultimately, it is up to each person to dig deep within themselves to find their own true, eternal answers as to what makes them happy... ...read more.